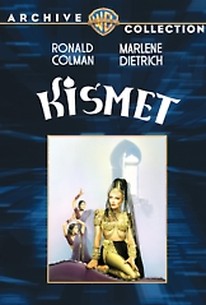 In this film, Ronald Colman plays Hadji, "king of beggars" in the days of the Arabian Nights. Posing as a prince, Hadji woos the favorite wife of the evil Wazir. Meanwhile, Hadji's daughter falls in love with handsome Caliph, while the Wazir connives to get the girl into his own harem.

Edward Arnold
as The Grand Vizier

Nestor Paiva
as Captain of Police

Anna Demetrio
as Proprietress of Cafe

Charles B. Middleton
as The Miser

William Rivas
as Member of Juggling Trio
View All

A fantastic abudance of luxury. [Full review in Spanish]

Pure escapism, Arabian style, about a beggar (Ronald Colman) trying to get his daughter well married. There are complications, of course, one of them being the ever-sultry Marlene Dietrich (who saves this little more than costumed dreck/entertainment kibble very nearly singlehandedly!) (and does not get enough screen time!) but we are only here for the costumes, right? Or the settings? Or the music? Or maybe even Colman's distinctive vocal patterns? Cause there's not much of a story or characters to care for.

'Kismet' starts strong, with a charming storybook introduction to the main characters, which has the added benefit that we immediately understand what's happening when a beggar (Ronald Colman) dresses up as a Prince, and a Caliph (James Craig) dresses up as a gardener's son in Baghdad. While disguised, Colman is carrying on with the vizier's wife (Marlene Dietrich), while Craig is secretly romancing the beggar's daughter (Joy Page). Complicating matters is the vizier himself (Edward Arnold), who wants to kill Craig, and also unwittingly becomes a rival for Page when Colman seeks to get her married to someone wealthy. While I adore Colman and Dietrich, the film degenerates and doesn't live up to its potential, or the millions MGM poured into it during wartime. Craig is wooden, and Page is too (though she is pretty). Dietrich's dance routine is clunky, with the exception of a languid, erotic move on her back towards the end, which was probably the best moment in the film. Hugh Herbert is annoying (as he invariably is) with the 'woo woo's' in his role attempting to provide comedic relief. One has to suspend disbelief for what is essentially a fairy tale (or better put, an Arabian Nights tale), but even with that said, the film lacks any semblance of authenticity. It's a strange hodgepodge, with a couple of bland musical numbers, silly magic tricks, and a lot of camp. It's unfortunate that more attention wasn't devoted to the script, as opposed to all of the flashy colors in the sets and costumes (which didn't work for me anyway). Perhaps during WWII audiences needed silly escapism, but it certainly hasn't aged well, and it's a mystery to me that it garnered four Oscar nominations. A couple of stars for Colman and Dietrich, who even in silly roles have moments that draw one's attention, but don't expect much beyond that.