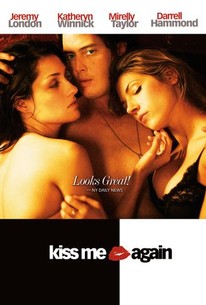 William Tyler Smith's Kiss Me Again concerns the emotional fallout that occurs when a couple who fancies themselves progressive and liberated attempts to have a sexually open marriage. Jeremy London plays Julian, a professor who is happily married to Chalice (Katheryn Winnick). When a mutual attraction develops between Julian and his student Elena (Mirelly Taylor), Julian begins to question his marriage vows. After the couple sees their neighbor engaged in a threesome, Julian broaches the topic of bringing another person into their marital bed. Once the physical feelings have been sated, everyone is left wit the emotional ramifications. Kiss Me Again made its world premiere at the 2006 Tribeca Film Festival.

Elisa Donovan
as Malika
View All

Critic Reviews for Kiss Me Again

[Smith] seems not to realize just how tired the notion of married folk deciding jointly to experiment with other partners is.

Manages to make a ménage à trois about as sexy as an oil change.

While this cautionary tale may well be comforting for those of us who have never had the opportunity to sleep with two gorgeous women at once, its deadly serious take on the subject may inspire more titters than anything else.

More trashy dialogue like that (and a more favorable nudity-to-sex-scene ratio) could have transformed Kiss Me Again into a guilty pleasure.

The far-left politics as normal situation aside, this film is actually extremely predictable

The lesson -- that three into two won't go -- has been learned by other improbably attractive couples in 'bold' movies about youthful experimentation and its long-term consequences, but the word never seems to get around.

Audience Reviews for Kiss Me Again

There are no featured audience reviews yet. Click the link below to see what others say about Kiss Me Again!