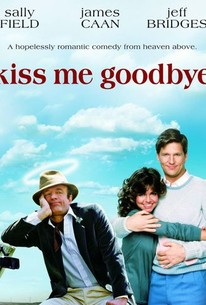 Robert Mulligan directed this Americanized re-make of the successful Brazilian comedy Dona Flor and Her Two Husbands. Sally Field stars as Kay Villano, a lonely widow of three years who can't forget the memory of her dead husband, Jolly (James Caan). Jolly was a selfish and unfaithful Broadway choreographer who still managed to win Kay over with his charm. But Kay has fallen in love again with Rupert Baines (Jeff Bridges), a stuffy professor of Egyptology. As her wedding day approaches, Kay receives a visit from Jolly's ghost, who taunts and harasses her, clearly upset that Kay is marrying someone so dull. Kay goes ahead with the marriage and Jolly refuses to disappear, resulting in a bizarre menage-a-tois.

Critic Reviews for Kiss Me Goodbye

Kiss Me Goodbye attempts to skate the thin ice of fantasy, and sinks. Too bad.

...a lackadaisical (and somewhat muted) piece of work that admittedly does grow more and more compelling as it progresses...

The movie has a certain dignity, but it never fully achieves any of its objectives. [Full Review in Spanish]

A picture-perfect example of how three great performers can elevate even the slightest and most lightweight material imaginable.

Audience Reviews for Kiss Me Goodbye

The story is fairly ridiculous but Sally is very winning and James Caan and Jeff Bridges make good contrasts. Claire Trevor is a pistol as Sally's bossy plain talking mother.