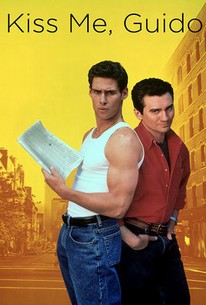 Can a homophobic tough guy and an out-of-the-closet gay man find happiness splitting the rent in Midtown Manhattan? This and other crucial questions are answered in this comedy. Frankie (Nick Scotti) is a macho and slightly thick-headed Italian-American from the Bronx who works in a pizzeria but dreams of becoming a successful actor, like his heroes Robert De Niro and Al Pacino. He's long had vague plans of someday moving to Manhattan and taking a serious shot at making his dream a reality, but it takes a personal crisis to put Frankie's plans into first gear -- namely, learning that his brother Pino (Anthony DeSando) has been sleeping with his girlfriend. This turn of events leaves Frankie with neither a significant other nor a place to live, so he starts hunting for affordable digs downtown. Looking in an alternative newspaper, Frankie spots an ad for a "GWM seeking same to share fully furnished apartment;" naive Frankie figures "GWM" means "Guy With Money," and since the price is right, he moves in right away. However, after spending several days with his new roommate Warren (Anthony Barrile) and his friends, Frankie slowly makes the discovery "GWM" actually means "Gay White Male," which is most certainly not what Frankie was looking for. However, he's in no financial position to go anywhere else, so both Frankie and Warren wind up confronting their fears and learning a lot about people different from themselves. As it turns out, Warren does a bit of acting, and when he hurts his leg shortly before the opening of an off-Broadway play in which he's to appear, Frankie arranges to take his place. There is, however, a catch -- Frankie will be playing a gay man, and he'll have to kiss another actor full on the lips in his big scene. Kiss Me Guido was the first feature film from writer and director Tony Vitale.

Tony Vitale
as Guido No. 1

Frankie Dellarosa
as Guido No. 2

Damien Achilles
as Tough Guy No. 1

Bruce Smolanoff
as Tough Guy No. 2
View All

Critic Reviews for Kiss Me, Guido

Kiss Me, Guido is a movie with a lot of funny one-liners, but no place to go with them. Like a 30-minute sitcom, it acts like you already know all the characters and are just happy to have fresh dialogue.

This minor indie farce plays gay and Italian-American stereotypical characters, resulting in a pleasant feel-good movie but no more.

Disappointing indie comedy. One joke that's not even that funny the first time.

Audience Reviews for Kiss Me, Guido

I did not enjoy this movie at all, the film makes me feel unease. An independent movie can use some better camera work than this one. The whole film is formulaic and ridiculous, too melodramatic for me. I don't think I laughed during the film at all, it's so dull... The acting was really bad as well, except for De Sando who did a good job at being a stereotypical guido. Nick Scotti is a real eye candy however, but that's the only perk of watching this film. Another con is that the film seems to drag on and on, aiming at no where. Plus the excessive swearing was not pleasing at all.