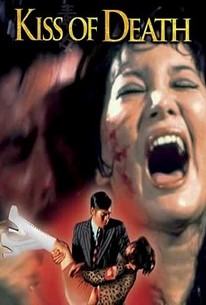 Left for dead on the street after being sexually assaulted by a violent gang of deviants and infected with a deadly sexually transmitted disease, a beautiful factory girl enlists the aid of a retired martial arts master in perfecting the skills that will allow her to seek deadly retribution. Her body was defiled, yet just as she thought the worst was over, she learned that her suffering had only begun. Given the grim diagnosis that she now has just months to live, the woman who was once an unwilling victim vows to seek bloody revenge against the men who destroyed her life. Only one man has the skills to teach her how to take out an entire army of thugs, and after her training is over no one will be able to stop her rampage of destruction. Now, as one woman with nothing to lose prepares to take down the entire underworld, the best her enemies can hope for is a quick and painless death. ~ Jason Buchanan, Rovi

There are no critic reviews yet for Kiss of Death. Keep checking Rotten Tomatoes for updates!

There are no featured reviews for Kiss of Death at this time.