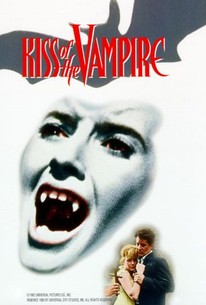 Kiss of the Vampire Photos

Producer Anthony Hinds used the alias John Elder to pen the screenplay of Kiss of the Vampire. Dr. Ravna (Noel Willman), an early 20th century Bavarian, entices a British honeymooning couple, Gerald and Marianne (Clifford Evans, Jennifer Daniel), to accept his hospitality. Once ensconced in Ravna's chateau, the couple discovers with horror that Ravna, Bavaria's biggest fan of Count Dracula, is the leader of an enthusiastic vampire cult. Clifford Evans plays the Van Helsing counterpart, Professor Zimmer, a vampire expert who first tries to warn the couple out of the area and then saves Marianne. Not as horrific as the title suggests, Kiss of the Vampire concentrates on the seductive, sensual side of vampirism, especially in a surrealistic masked-ball sequence. Though it contains far less bloodletting than most Hammer productions, Kiss of the Vampire was severely cut for its American TV release (and retitled Kiss of Evil).

Olga Dickie
as Woman at Graveyard

News & Interviews for Kiss of the Vampire

View All Kiss of the Vampire News

Critic Reviews for Kiss of the Vampire

...far more sophisticated than most horror or vampire movies, and the restraint is to be commended...

The duality indulges in critique of wealth culture and classic horror tropes, and this, along with Sharp's craftsmanship and Hinds' writing, gives The Kiss of a Vampire an identity all its own.

Features one of the best openings found in any Hammer film.

The Kiss of the Vampire is a palm-rubbing good time for fans of gothic vampire stories!

Director Don Sharp's first major feature was one of the studio's more subtle efforts and far more effective for that, with an intelligent script and striking use of colour.

Some will doubtless argue the point, but Don Sharp's The Kiss of the Vampire (1963) may very well be the best of all the Hammer horror films.

Audience Reviews for Kiss of the Vampire

A movie from the Hammer Collection. This is an awesome movie for having been filmed in 1963. The color throughout the movie is excellent. About a young British couple traveling through the countryside when they run out of gas and stay at a local inn that nobody wants to stay at, reason being a vampire lives close by, and he invites this newly married couple into his home for dinner, no pun intended. So starts the typical Vampire steals girl away story, but its worth every bit of 4 stars.

Despite a strong opening, Kiss of the Vampire was a sort of jagged bore for the first hour or so. Most of the elements of a Hammer classic were there but it just wasn't coming together. Fortunately the last half hour saved this movie in spades. The story is as bare bones as you can get but the atmosphere is with any worthy Hammer movie great. The last half hour was great and made the entire dull first half completely worth it. The effects in the climax were to put it politely, dated. But the images were great. Definitely worth it.

This is a simple, but effective vampire movie. The story is simple but really good, the actors are pretty good, although I'm not familiar with them. Still, I really liked this movie, it's a good vampire flick.

Hammer's third vampire movie, though not part of the 'Dracula' series. Of interest for the representation of vampirism as a religious cult. Not one of Hammer's most memorable casts; only Noel Willman, as the vampire hunter, and Isobel Black, as a vampire, impress. Well directed and photographed all the same, and better than all but the first three 'Dracula' movies. Excellent climax.

Kiss of the Vampire Quotes