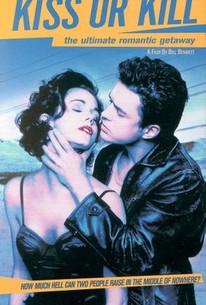 In this psychological thriller, two young lovers take off across the desert toward Perth after their robbery scam goes awry and one of their victims accidentally dies. Their operation started out normally enough with Nikki seducing a married stranger into her hotel room where she planned to drug, then rob him with assistance from her boyfriend Al. Unfortunately, he accidentally overdoses and dies. Things take an even darker turn when the two discover the man is carrying a video tape of a nationally known athlete committing a sexual act with a child. Nikki and Al immediately take off with Zipper Doyle, the athlete in hot pursuit. Two policemen, Hummer and Crean are also searching for them. The situation grows worse when the two fugitives spend the night at a motel. The owner is kind to them, but during the night, someone came in an slashed his throat. Al thinks Nikki, who was traumatized as a child when she saw a burglar burn her mother alive, may have done it while sleepwalking. Nikki, in turn, thinks Al did the deed. When more murders happen a short while later, it only serves to increase the tension between the two.

Jennifer Bennett
as Bel
View All

Critic Reviews for Kiss or Kill

Imagine Terrence Malick's Badlands done as black comedy, with the rural atmosphere of Psycho and dialogue rubbed against flint.

If this scenario sounds like stock film-noir plotting, Bill Bennett ... makes something utterly fresh and, for all its scent of evil, invigorating out of it.

A chaotic-but-pointless exercise in mediocrity.

The picture's velocity, style, irreverence, unexpected playful humor and new take on the noir genre make it worth a look.

Bennett's screenplay is consistent, completely concerned with the haphazard and the jogging of conventional expectation.

I've seen countless road movies, but this one felt different, as if it had an unbalanced flywheel.

An experimental, confronting riff on a well-worn genre trope, dripping with atmosphere, and packed with excellent performances.

Largely improvised to great effect, Kiss or Kill is a film that adheres to a classical narrative paradigm complete with plot causality whilst offering another level of reflection thereupon for a clued-in cine-literate audience.

One of the best thrillers Australia's produced

Makes what is familiar seem fresh.

A clever and lively entry from Australia than introduced the world to Frances O'Connor (A.I.).

Audience Reviews for Kiss or Kill

I saw this at the cinema when this first came out and really enjoyed it. Around 20 years later, it is still a good movie and not all that dated considering.