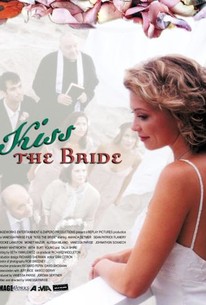 Critic Reviews for Kiss the Bride

Romantic comedies don't come any blander or more generic than this one.

...one of those rare movies that leaves the viewer wanting more after the credits have rolled...

The kind of vanity project that every Hollywood actor dreams of making, and when it's all said and done they wonder why it never got theatrical distribution.

[Looks like] a pilot for an east coast version of Baywatch.

Audience Reviews for Kiss the Bride

Burt Young and Talia Shire are the parents in this "my crazy Italian family!" romcom, the gravitas, the weight in this otherwise cheese souffle, and the director doesn't know it. That is the beginning of flubs made. Skip it. Or simply watch any ABC sitcom. It feels the same.

Has its moments, particularly Amanda Detmer's meltdown, but her three sisters are such loathsome, selfish hateful bitches that it drains most of the enjoyment out of any small worthwhile contributions the film does offer. That said several supporting actors do good work, Talia Shire and Alyssa Milano in particular give fine performances.

Here is a good movie with an interesting story plot that surrounds the lives of four sisters. As one prepares for marriage, the others begin to seek their own happiness. Great cast- Burt Young, Talia Shire, Amanda Detmer, Brooke Langton, Jonathon Schaech, and Monet Mazur. Tons of laughter. Definitely worthy.