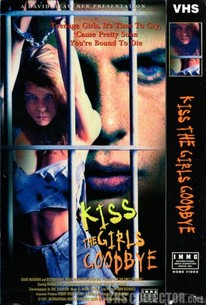 A sadistic piano teacher with a taste for blood forms a bond with a captive woman that he's just put through hell in Kiss the Girls Goodbye. Carl Ray Hicks (Frankie Ray) has been driven mad by his mother and now preys on innocent victims to vent his psychotic urges. When he kidnaps a beautiful hitchhiker named Dawn (Stephanie Shaub), little does he realize that her torture might turn to pleasure for both of them in the end.

Robert Ryder
as Man in Boxers

Billy Bleiweiss
as Boy on Bike

There are no critic reviews yet for Kiss the Girls Goodbye. Keep checking Rotten Tomatoes for updates!

There are no featured reviews for Kiss the Girls Goodbye at this time.