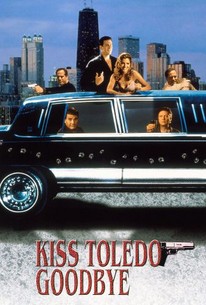 A man makes some unexpected (and potentially dangerous) discoveries about his family in this comedy. Kevin Gower (Michael Rapaport) is an investment advisor who is engaged to marry the woman he loves, Deeann (Christine Taylor). One day, Kevin is approached by a gruff stranger named Max (Christopher Walken), who "escorts" Kevin into a car. Soon Kevin is introduced to Sal (Robert Forster), a leading organized crime figure who informs Kevin that's he is his biological father. This is puzzling news for Kevin, especially after Sal's limousine is blown up only a few moments later. Madge (Nancy Allen), Kevin's mom, confirms that Sal was indeed Kevin's father, though she thought it best that he not know about it. A few days later, Max and Wendy (Jamie Anderson), Sal's girlfriend, approach Kevin and ask him to attend Sal's funeral. Kevin agrees, but he soon learns that his presence is requested not just to memorialize the life of a friend or relative -- whoever killed Sal may well be coming after Kevin next, and if they can use him as bait, they have a better chance of finding out who rubbed out Sal. Kevin isn't sure how he feels about this, since Deeann is suspicious of Kevin's stories about wiseguys, exploding limos, and Wendy -- and Kevin's co-workers have been wondering where he's been.

Paul Schulze
as Nicky
View All

There are no critic reviews yet for Kiss Toledo Goodbye. Keep checking Rotten Tomatoes for updates!