Kisses For My President1964 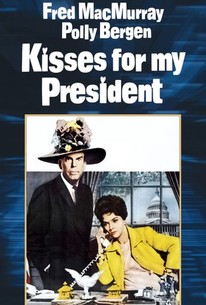 Kisses For My President Photos

Behind every great woman, there's a man who isn't so sure he's happy to be there -- or at least that's the state of affairs in this gender-switch comedy. Leslie McCloud (Polly Bergen) makes history when she becomes the first woman elected to the office of President of the United States. However, while Leslie's achievement is a great step forward for women, her husband Thad McCloud is less enthusiastic about his own role in closing the gender gap. Thad soon finds his daily schedule is filled with meeting women from garden clubs, his official quarters are still filled with pink and frilly furniture from the previous resident, and Leslie's extremely busy schedule is putting a severe crimp in their love life. While Thad stews over his lowly status as a male "First Lady," Leslie is attempting to avoid an international incident by negotiating with Latin dictator Valdez (Eli Walach), who develops a less-than-diplomatic interest in the Leader of the Free World. Kisses For My President also features Arlene Dahl, Edward Andrews, and Ana Capri.

Donald May
as John O'Connor

Critic Reviews for Kisses For My President

Polly Bergen's splendid performance almost overcomes the many silly scenes and ridiculous ending of 'Kisses for My President.'

Amiable but bland gender-switch comedy about the first woman president of the United States."

There are no featured reviews for Kisses For My President at this time.

Kisses For My President Quotes