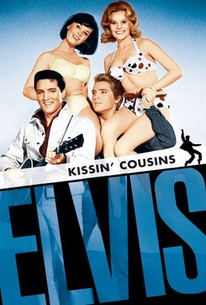 Elvis Presley plays a double role in Kissin' Cousins. When the U.S. government wants land owned by the hillbilly clan headed by Pappy Tatum (Arthur O'Connell), they send Air Force Lieutenant Josh Morgan (Presley), a cousin of the Tatum's, to try and secure the land for a proposed missile base. Josh comes face-to-face with Jody Tatum, his blonde-haired look-alike. Glenda Farrell plays Ma Tatum, and distaff interest for Elvis is provided by Cynthia Pepper, Yvonne Craig, a busty Beverly Powers, and Hortense Petra. Watch for Maureen Reagan as one of the Kittyhawks, a group of desperate, man-hungry females out to get some love. This film was the first of the low-budget movies that would unfortunately plague the rest of Elvis' movie career. The song selection also reflects a decline in the quality of both recording and acting parts offered to Presley. Once he fulfilled his contractual obligations for the forgettable features, Elvis ended his film career and devoted his efforts exclusively to live shows and recording.

Dumb even for an Elvis movie, with three fine performers Arthur O'Connell, Jack Albertson and Glenda Farrell wasted in support. Poor Glenda even has to sing to a dog!

Elvis and hillbillies? I don't remember much about this movie, but it's not as bad as it sounds, really. Not that it's a good movie.