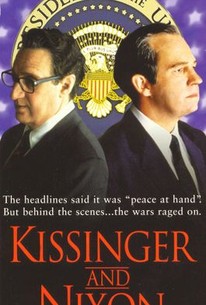 Walter Isaacson's book Kissinger: A Biography served as the basis for this made-for-television movie about the famed political leader. Beau Bridges stars as President Richard Nixon and Ron Silver portrays Henry Kissinger, Nixon's national security advisor. The adaptation shows how Kissinger worked to try and end the Vietnam crisis while Nixon maneuvered to keep his political image strong until election time. Bridges was nominated for an Emmy for his lead performance.

George Takei
as Le Duc Tho

Paul Miller
as Negreponte
View All

Critic Reviews for Kissinger and Nixon

There are no featured reviews for Kissinger and Nixon at this time.