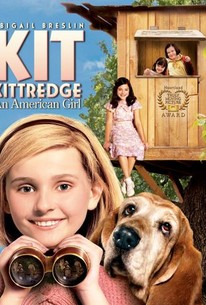 Critics Consensus: Refreshingly sweet and sincere, Kit's doll-and-book-inspired do-good mystery may be geared towards the tween girl but will please audiences of all ages.

Critics Consensus: Refreshingly sweet and sincere, Kit's doll-and-book-inspired do-good mystery may be geared towards the tween girl but will please audiences of all ages.

Critic Consensus: Refreshingly sweet and sincere, Kit's doll-and-book-inspired do-good mystery may be geared towards the tween girl but will please audiences of all ages.

Max Thieriot
as Will Shepherd

It's hard to dislike a tween picture that opens with Eleanor Roosevelt, but if explaining mortgage meltdowns to their tots doesn't sent parents screaming, the performances will.

The tweener girls for whom it is aimed deserve better. A mind is a terrible thing to waste.

This classy, heart-on-its-sleeve movie is packed with laudable life lessons and Depression-era trivia.

This is a sweet, G-rated story of 1930s girl power, with nary a princess in sight.

This first full-length film inspired by the American Girl doll series may very well become an American classic to delight young children for years to come.

Kittredge may lack the fanfare of its fellow films, but it proves to be an interesting experience that should please its target audience.

If you can make it through an ending that's over-the-top sappy, even for a children's film, you'll find a story about a girl who does embody some of the best ideals of American girlhood.

By [the end] point, the gentle humor and selfless sentiment of the film has done its work, and you're likely to walk away with some uplifting life lessons to discuss with your kids.

Set in a well-scrubbed Depression-era Cincinnati, Kit Kittredge is surprisingly effective at addressing economic hardship in terms kids can understand.

It's not a movie just for little girls, it is a great history lesson for a lot of people, but it could have been great without the American Girl logo, which made it really embarassing for some guys to go see, but its just an okay movie.

Kit Kittredge is a kid growing up in the early 1930's when everyone was losing their jobs, and families had to diversify to pay the bills. Kit's family took in boarders which brought a number of interesting characters to the film. This movie is part solve-a-mystery and part Kit-wants-to-be-a-reporter.

Isn't interested in portraying the grim lifestyles of the Depression but rather creates a faux-American Girl doll populated imitation of one. This movie aims more to remind me of the doll confections if anything else. But it's cute and family friendly and all that. Thesps Joan Cusack and Stanley Tucci are over-the-top and FUN. And Abigail Breslin is incredibly adorable and natural.

Once again, we have another film from under the radar that is a nice watch for the entire family. Kit Kittredge: An American Girl has a little bit of everything. Actually, it doesn't have robots, military soldiers, spaceships, monsters ... you get the picture.

The story is a little deceiving. At first glance it seems like this movie will be about Kit Kittredge becoming a reporter for the Cincinnati Register. It is about that, but the main focus is on a crime investigation, which makes this story more like a mystery.

An interesting fact about the story is that "Hobos" are a big part of it. The movie does show how they are seen in the Great Depression years.

The story doesn't actually fly by, but it isn't necessarily a slow burn either. There are a good variety of characters to watch and the younger ones tend to liven up the picture. This flick also gets most of the emotional drama out of the way in the earlier parts before having it return for a happy ending, a happy ending, and another happy ending.

Abigal Breslin has already proven that she can carry a film and this one is no exception. All the supporting actors fit in as well. Some of these include Joan Cusack, Chris O'Donnell, Julia Ormond, Jane Krakowski, and Stanley Tucci. Even Colin Mochrie is up to par.

This is not just a movie for kids as adults will find this just as enjoyable. Don't be ashamed to spend 100 minutes of your life with this film.