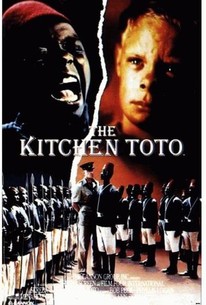 In the vernacular of Kenyan whites of the 1950s, a "kitchen toto" was a native black servant. One such "toto" is 12-year-old Mwangi (Edwin Mahinda). The son of a black clergyman who has been slain by Mau Mau for his moderate beliefs, Mwangi is taken into the household of British police-chief Bob Peck. Torn between two cultures, Mwangi finds himself in a position to rescue his white protectors from insurgent Mau Maus, who are pressing for Kenyan independence-just as the boy's father had. The "no easy answers" climax is one that can't be revealed here. Kitchen Toto was the first directorial effort of Harry Hook, a Kenyan native and British National Film and Television School grad who was just about Mwangi's age when the events depicted in this film occurred.

Emmanuel Mnguto
as Murikuri the Gardener

Critic Reviews for The Kitchen Toto

There are no critic reviews yet for The Kitchen Toto. Keep checking Rotten Tomatoes for updates!

There are no featured reviews for The Kitchen Toto at this time.