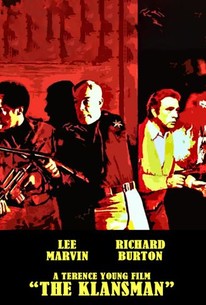 Samuel Fuller was originally set to direct this turgid racial melodrama but jumped ship, replaced by Terence Young. Lee Marvin stars as Sheriff Bascomb, the entire law enforcement department in a small Southern town, who is trying to keep a lid on local Ku Klux Klan activity. But racial tensions first simmer and then explode when Nancy Poteet (Linda Evans) is raped and the town's mayor Hardy (David Huddleston), who is also the head of the local chapter of the Ku Klux Klan, blames an innocent black man for the crime. Also involved in the proceedings is local landowner Breck Stancill (Richard Burton), who must have modeled his Southern accent on the soupy delivery of James Mason in Mandingo.

Victor Perrin
as Hector
View All

Critic Reviews for The Klansman

Nearly all of the protagonists' choices are reprehensible - sometimes worse than the white-hooded, cross-burning antagonists themselves.

The film is hysterical to the point of laughter and dangerously misguided to boot.

Why Is it that when almost any film is set in the Deep South, normally sane writers, directors, and actors are inspired to lose their wits completely, feel that anything goes, and vie with each other as to who can make the cauldron bubble faster?

The final part is quite memorable, bizarre and without grayscale. [Full Review in Spanish]

It's a shame that the first part of the plot that promises an important film then disintegrates into a story of violence and crimes. [Full Review in Spanish]

It's a Hollywood movie with the great Lee Marvin giving a morally complex performance opposite a noticeably intoxicated Richard Burton.

The more gruesome acts against blacks undoubtedly make The Klansman a favorite viewing option in the Trump-Bannon White House, but everyone else will be properly repulsed by this utterly repellent melodrama.

Perhaps at some point The Klansman had the potential to live up to its incendiary material, but it ends up doing little more than crassly exploiting it.

Audience Reviews for The Klansman

There are no featured audience reviews yet. Click the link below to see what others say about The Klansman!