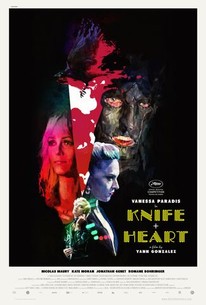 Critics Consensus: Knife + Heart wrings giallo-inspired thrills out of a boldly challenging story that defiantly succeeds on its own stylish merits.

Critics Consensus: Knife + Heart wrings giallo-inspired thrills out of a boldly challenging story that defiantly succeeds on its own stylish merits.

Critic Consensus: Knife + Heart wrings giallo-inspired thrills out of a boldly challenging story that defiantly succeeds on its own stylish merits.

The film has a big heart sometimes for the victims, and yet the deaths are so sadistic and so brutal... It didn't have the empathy that I thought it should have.

Witness the encomia extended by some to Yann Gonzalez's Knife+Heart.

a luridly coloured, transgressively queered piece of self-conscious schlock where cutting is the business of lovesick killers as much as filmmakers - and both cut right to the heart.

It's an oddly compelling thriller that may just presage bigger and better things from its maker.

It's postmodernism at its finest.

If this was just a mood board, then it would get two big thumbs up, but as an actual movie with a plot, we need a little bit more. Paradis' acid blonde hair looks great against the neon, but a weave does not a film make.

An intoxicatingly rich text, beguiling and thoughtful in its conception of queer cinema as a medium of long-buried desires and fantasies.

I was really mesmerized by the characters... [but] they drop off.

It is rich in potential and when it works it sings. When it stumbles, it can oftentimes wind up actively unlikable.

Its humor is the strongest aspect due to the film's surrendering to its shallower desires, but the realizations of deeper themes are portentous.

Overall, then, Knife + Heart is a lavish visual gift with a remarkable soundscape and plenty else to recommend it.

UNDRESSED TO KILL - My Review of KNIFE + HEART (4 Stars) If you're like me, you've been hungering for a lurid, trashy slasher movie, the kind that Brian De Palma used to churn out in all its pop-colored, split screen glory. Imagine my excitement then when I heard about KNIFE + HEART from French filmmaker Yann Gonzalez and his co-writer Cristiano Mangione. Its description alone had me all dressed up in drag hiding in an elevator with a straight razor at the ready. Set in the seedier side of 1979 Paris, the film follows hard-drinking Anne (Vanessa Paridis) a lesbian who produces gay porn who keeps losing members of her company to a leather-masked serial killer whose weapon of choice is a dildo equipped with a retracting switchblade. Of course, like any great thriller, Anne has an Achilles Heel in the form of an obsession with her ex Lois (Kate Moran), who happens to act as her Editor. As such, Anne creepily checks in on Lois through a peephole in the wall (a great image in the film) and somewhat pathologically incorporates everything that's happening to her into her films. Add a swirling, driving George Moroder-esque synth score by M83 and dazzlingly colorful, exciting cinematography by Simon Beaufils and a jumble of tones from campy to melodramatic to scary, and you have a film unlike any otherâ¦almost. I say "almost" because KNIFE + HEART is about cinema, so its references to such films as CRUISING, BODY DOUBLE, and VERTIGO, to name a few, plus an occasional nod to early John Waters, keep it from being totally original. Clearly Gonzalez loves the films it references, but he also has something more on his mind. KNIFE + HEART tackles such issues as homophobia, internalized and otherwise, the effects movies have on our lives and vice versa, how the art of storytelling can save our lives, and how sometimes unnatural obsessions are worth the risk. No matter how you slice it (pun intended), it's a wild, fun ride. Yes, it's messy, bogged down and sometimes inert in its second half, unresolved, and completely unsatisfying as a whodunit, but if you just let its pure cinema wash over you, you may not care. De Palma at his best, as with DRESSED TO KILL, operated in a similar fever dream state. Paradis has a serious, commanding presence, an enigmatic stare and just the right amount of damage to her personality to anchor the film and allow supporting players like Nicholas Maury as one of her crew members to carry the campier elements with real flair. The film speaks to cinema's checkered past with depictions of gay people, and Maury relishes the opportunity to mince and smolder while refreshingly never being the object of derision. In its own twisted way, the film reclaims the sissy persona and puts it in its rightfully heroic place. The film consistently upends such tropes. When was the last time you saw a lesbian seduce a straight man into going gay-for-pay? When have you seen a film create the porn versions of its own sequences? Things get clumsy and on-the-nose in the frankly boring last third, but it's also seductively filmed, so my boredom may have just been hypnosis instead. While Paradis reminded me of Melanie Griffith in BODY DOUBLE, the major influence on this film has to be CRUISING. The first kill almost feels like a shot-for-shot recreation, but Gonzalez adds a sickly growl and haunted eyes to his murderer. It's nightmare inducing. Much like its predecessor, it throws out a slew of suspects but doesn't quite resolve in a traditional mystery fashion. Gonzalez, like Friedkin, seems more interested in shining a light on pathology and trauma than in achieving the perfect Rube Goldberg contraption. It doesn't quite have the depth of character to pull this off, but this genre rarely does. Much like the films of Dario Argento, we simply relish the over-the-topness of it all, hang on for dear life, and hope we make it out alive.