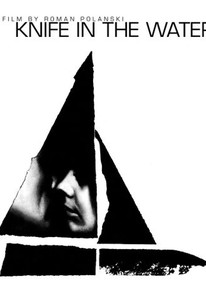 Knife in the Water Photos

Knife in the Water (Noz W Wodzie) was the first feature film effort of Polish director Roman Polanski. Sportswriter Leon Niemczyk and his wife Jolanta Umecka invite baby-faced hitchhiker Zygmunt Malanowicz to join them on a yacht excursion. Sensing that his wife is attracted to Malanowicz, Niemczyk plots to humiliate the boy by showing off his own athletic prowess during the cruise.

News & Interviews for Knife in the Water

View All Knife in the Water News

Critic Reviews for Knife in the Water

Middle-aged cocksureness, arrogance and incomprehension versus teenage revolt, with a young woman as a sort of arbiter, is the theme of this lively and inventive little pic.

Polanski's first feature, a model of economic, imaginative film-making which, in many ways, he has hardly improved upon since.

Polanski arrived on the scene with an almost super-human knack for tension; one of the great directorial debuts in cinema's history.

Knife in the Water has one of those simple, clearly expressed narratives that grabs you and holds you even though not much goes on.

It eminently justifies the interest in its acid contents and in the techniques of its young director that it stirred.

Not easily accessible, but a film whose scenes and themes stick with you.

Polanski has played a cool trick by taking this ordinarily social squabble out of the city and putting it down in the middle of a watery nowhere.

Taut, compelling, and engaging, Polanski's Oscar-nominated thriller is one of the most brilliant debuts in film history.

The acting, music and camerawork all weave together to create an unexpectedly magical, brilliantly crafted, intensely sensuous experience.

Attests to the idea that Polanski was from the very onset, a filmmaker with a singular and disturbing vision. His is clearly a cinema of obsession.

Audience Reviews for Knife in the Water

An successful middle aged man, a trophy wife, and a young aimless drifter converge for a day's outing on a sailboat ... what could happen next? Polanski seems to suggest that the setup tells the story in this brilliantly filmed black and white drama from 1962, and it does indeed. It does indeed.

It was good but not as good as repulsion. The acting and cinematography were great but the film's pacing with its lack of story depth left me somewhat empty at the end.

A Roman Polanski debut work that strictly features a ménage à trois: a couple and a young stranger, on a sailing trip. Knife In The Water features gradual subtle exposition of tension that has developed into something intriguing. Inventive. Stirring. Dynamic.

This is one of Polanski's great early films, and one of my favourites, it involves a love triangle, and is very suspenseful and dramatic. I love it.

Knife in the Water Quotes