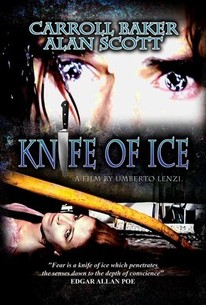 This is yet another giallo thriller from prolific Italian filmmaker Umberto Lenzi and starring Carroll Baker, whom Lenzi had already featured in Paranoia and Orgasmo. Baker, best-known in America for her starring role in the controversial Baby Doll, stars as Martha Cauldwell, who was struck mute when she saw her parents die in a railroad accident at the age of 12. She was taken in by a family in Martinique, and her cousin Jenny Ascot (Ida Galli appearing as "Evelyn Stewart") comes to visit her as the story begins. Jenny is murdered shortly thereafter, and the police tie her death to the sex killing of a teenaged girl a few hours earlier. The prime suspect is a local hippie whom the locals believe to be a drug-addled Satanist. This touch, similar to the persecution of suspected witch Florinda Bolkan in Lucio Fulci's Non Si Sevizia un Paperino -- released the same year -- is reinforced by a scene involving a Donald Duck toy which suggests that the similarities between the two films aren't entirely coincidental (that film's original Italian title translates as "Don't Torture Donald Duck," later changed to Don't Torture a Duckling to avoid copyright issues). At any rate, the hippie is arrested but exonerated after two more murders occur while he is in jail, and so the other suspects (including Franco Fantasia as an unctuous doctor, Eduardo Fajardo as a sinister chauffeur, and Jorge Rigaud as the occultist uncle) fall under suspicion. The usual internal rivalries and family secrets are punctuated by numerous close-ups of characters' eyes (another Fulci trademark) and various occult red herrings, only to end up in a fairly predictable -- if highly improbable -- secular conclusion. Sergio Ciani and Carla Mancini co-star in this offbeat effort, which, despite its inconsistencies, should prove fascinating to genre devotees. ~ Robert Firsching, Rovi

There are no critic reviews yet for Knife of Ice (Il coltello di ghiaccio). Keep checking Rotten Tomatoes for updates!

There are no featured reviews for Knife of Ice (Il coltello di ghiaccio) at this time.