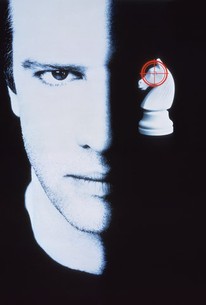 This murder mystery from director Carl Schenkel stars Christopher Lambert (Highlander) as Peter Sanderson, an expert chess champion. When a woman Sanderson has recently slept with is among several women brutally murdered at a chess tournament, he becomes a suspect. But when the murderer contacts Sanderson and informs him that he's set up a maniacal human chess game, he realizes that he'll have to beat the murderer to stop the killings and clear his own name. Diane Lane plays a psychologist who falls for Sanderson, and Tom Skerritt is the local sheriff investigating the case. Knight Moves won the Critics Award at the 1992 Cognac Film Festival.

Holly Chester
as Officer No. 2

Despite an absurdly convoluted plot predicated on the idea that the hero might be a serial killer, this over-heated and over-stylised thriller is devoid of any real suspense...

This atmospheric thriller is average with the one of top chess touring masters becomes the prime suspect in a macabre, ritual murder at an international chees tournament. Lucky me, I really believe Christopher Lambert wasn't a murderer before I found out at the ending. Checkmate!