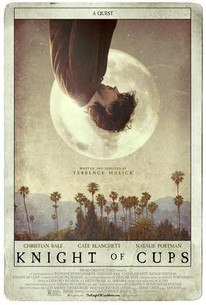 Knight of Cups follows writer Rick (Christian Bale, The Fighter, American Hustle) on an odyssey through the playgrounds of Los Angeles and Las Vegas as he undertakes a search for love and self. Even as he moves through a desire-laden landscape of mansions, resorts, beaches and clubs, Rick grapples over complicated relationships with his brother (Wes Bentley) and father (Brian Dennehy). His quest to break the spell of his disenchantment takes him on a series of adventures with six alluring women: rebellious Della (Imogen Poots); his physician ex-wife, Nancy (Cate Blanchett); a serene model Helen (Freida Pinto); a woman he wronged in the past Elizabeth (Natalie Portman); a spirited, playful stripper Karen (Teresa Palmer); and an innocent Isabel (Isabel Lucas), who helps him see a way forward. Rick moves in a daze through a strange and overwhelming dreamscape -- but can he wake up to the beauty, humanity and rhythms of life around him? The deeper he searches, the more the journey becomes his destination. The 7th film from director Terrence Malick (The Thin Red Line, Tree of Life), Knight of Cups (the title refers to the Tarot card depicting a romantic adventurer guided by his emotions) offers both a vision of modern life and an intensely personal experience of memory, family, and love. Knight of Cups is produced by Nicolas Gonda, Sarah Green and Ken Kao. Prominent crew includes cinematographer Emmanuel Lubezki (Gravity, Birdman), production designer Jack Fisk, costume designer Jacqueline West, and composer Hanan Townshend (To The Wonder). The film's ensemble cast also includes Antonio Banderas, Cherry Jones and Armin Mueller-Stahl.

Jennifer Connell
as June
View All

News & Interviews for Knight of Cups

View All Knight of Cups News

Critic Reviews for Knight of Cups

On a single, devotedly attentive viewing, I couldn't grok the logic of these headings beyond the lamely prosaic.

I just need a break from Malick.

A superlative triumph that transcends any rational critical analysis I could ever have hoped to throw its way.

More of the same from Malick, but as thin as it is, this is a trick that still hasn't run its course.

Knight of Cups is not without moments of poetry however: an underwater shot of dogs in a swimming pool, chasing elusive tennis balls, is as effective a metaphor for Hollywood as the rest of the picture put together.

This mess of tracking shots of deserts, roads and rotating love interests stubbornly refuses to coalesce into anything resembling a narrative film.

'Knight of Cups' is vast. Not everything fits, but that is of little concern.

It is not possible to organize the complexities of modern life in the pauper's bowl of empty moral abstraction and neo-mysticism in an artistically or intellectually satisfying manner.

Tedium, thy name is Knight of Cups.

Intense emotion seeps through every frame, and it's our responsibility to fill in the missing pieces ... Most people would be turned off by [Malick]'s style, but for me it is absolutely riveting.

The film meanders along and it seems as if the protagonist doesn't change. His journey of self-discovery doesn't go anywhere. You're left feeling as if you've witnessed something beautiful but empty. Perhaps it is a critique of Hollywood after all.

Audience Reviews for Knight of Cups

If Siddhartha Gautama lived on the west coast, never attained any sort of enlightenment but feigned his spirituality by reading obscure Gnostic texts and getting tarot readings all the while basking in the superfluous reveries of modern America (i.e. boobs), he probably wouldn't be a very good role model. Christian Bale's character seems to do just that in this film, and it was very difficult to feel any sort of kinship or empathy towards him. If Bale is here representing anything or anyone, most would place their bets on it being director Terrence Malick himself. If this is true then Malick has revealed himself to be less of a Bodhisattva and more of a bourgeois savant in "Knight of Cups". Taking the poetic stylism of his past few films to the absolute extreme, a few lines of on-screen dialogue become vital breaths of fresh air as the viewer wades in the mystifying soundtrack, swims through whispers of narrated subconsciousness, and drowns in the free-flowing dance of the camera. It's as ethereal as it is ephemeral. It is a beautiful but somewhat empty gift box that you can place whatever dreams, beliefs, or meaning you want inside. But if you aren't in the mood, it can be a grating bore. Malick's defining work "The Tree of Life" is an absolute masterpiece of cinema, and this movie seems to be an extension of that. It is an experimental film, and like all experiments it must have a hypothesis. I'm guessing the hypothesis for "Knight of Cups" was: Can I push the boundaries of visual language farther than the limits of my audience's patience? Given the past several films have continually pissed off Malick fans and haters alike, it is no surprise that you'll hear the word "pretentious" thrown out fairly often. Pretentious is a word that I think most people use to excuse their poor taste and/or lack of comprehension of a given work of art. To say that Malick and company are biting off more than they can chew or that they think of these films as more important than they are is a bit insulting to not only the filmmakers but also to those of us with a background in theology, mysticism, and/or the occult. The philosophy of the film is not half-baked, but it is a bit syncretic, blending eastern and western spiritual concepts at will. A brief literature review of the film (hell, just look up what the knight of cups means in tarot) will yield a more enriched understanding of the film. That being said, "Knight of Cups" and its recent predecessors are for the most part all head and no heart. That doesn't make them any less real, just less resonant. Look at Wim Wenders. Most people will be looking for the raw sentimentality of "Paris, Texas" not the beguiling odyssey of "Wings of Desire". For Malick, he's a much different man than he was when making "Badlands". Instead of focusing on those big moments when your life changed, he catches glimpses of someone walking off, or a brief exchange when flirting, or another disappointing day - when life was really changing, it just didn't feel that way at the time. All in all this film comes across as detached and a little too specific to the experiences of a straight, white, male upper-middle class artist, but there's more to be found if you delve deep enough.

Terrence Malick's are often something completely different from anything you'll experience at a movie theater, so I'm always interested in seeing the next thing he has up his sleeve. Knight of Cups continues his streak of highly experimental and undoubtedly polarizing filmmaking. I can't say it's the easiest to review, considering there really is no overarching story, so I'll instead opt to simply react to my time watching this ensemble piece. The main thing I took from the experience was that Malick wished to make something about the hypocritical underbelly of the Hollywood landscape. Christian Bale, who plays the main character (of sorts), is a Hollywood screen writer but we never truly get any sense that he works within the film business. Instead, it's his exploration or pilgrimage through the majestic world and sexual desires that come along with it. But really, that's about it. It's gorgeously shot by Emmanuel Lubezki, obviously, and Malick weaves through characters in an interestingly brisk fashion. I don't necessarily mean this in a critical way, but it may be a better watch without the unnecessary and strange narration or score. Instead, enjoy Lubezki's beautiful cinematography and several big name actor cameos as a background to whatever else you're doing. The story (or lack thereof) just didn't resonate with me. I much prefer Malick's earlier features with more polished performances and traditional script. But perhaps, that's just me. 40/100

Malick throws up a tale of disillusionment and disconnection and ultimately succeeds in disillusioning, disconnecting the viewer. Filmed using practically every popular L.A. shooting locale (every friggen one!) and using nothing but a shoulder level fish eye lens (were there no other cameras in Los Angeles, film capital of the world?), characters wander about in and out of scenes, sometimes looking at one another but mostly gazing into the distance pensively. "Oh look, there's a face I recognize, a movie star. Who is it?" But they're already gone, their character's point in this festival of mumbled whispering as lost as you are no doubt apt to be.

Malick seems to have become one of those old pals who love to tell the same story over and over in parties, and so he gives us this redundant, repetitious and, well, pretentious meditation that doesn't even have the consistency and beauty of The Tree of Life and To the Wonder.