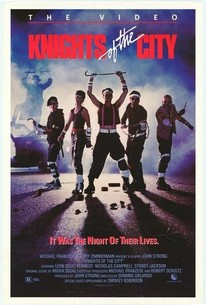 Knights of the City Photos

In a weak mix of too many ingredients -- a dash of West Side Story, a pinch of Breakin', and sprinkles of references to other teen gang films -- this saga of one gang at odds with another is more like warmed-up leftovers than an original creation. Troy, Mookie, and Joey (Leon Isaac Kennedy, John Mengati, and Nicholas Campbell) belong to a gang at war with the nasty punks of the Mechanix. Troy and Mookie are into rapping and rock music and after some failed attempts to break into recording, they take dance lessons and win a coveted talent contest that puts them ahead for a change. Meanwhile, the Mechanix are not interested in what these guys won and are preparing for their long-awaited showdown with the would-be entertainers.

Denny Terrio
as Himself

Leslie Wagner
as Girl in Disco

Smokey Robinson
as Himself

Kurtis Blow
as Himself

Harry Wayne 'KC' Casey
as Himself

Deney Terrio
as Himself

Mr. X
as Dancer
View All

Critic Reviews for Knights of the City

There are no critic reviews yet for Knights of the City. Keep checking Rotten Tomatoes for updates!

Audience Reviews for Knights of the City

There are no featured audience reviews yet. Click the link below to see what others say about Knights of the City!

Knights of the City Quotes