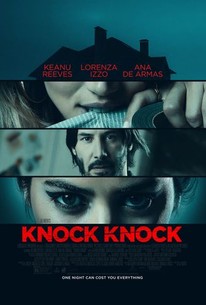 Critics Consensus: Knock Knock brings a lot of talent to bear on its satirical approach to torture horror, but not effectively enough to overcome its repetitive story or misguidedly campy tone.

Critics Consensus: Knock Knock brings a lot of talent to bear on its satirical approach to torture horror, but not effectively enough to overcome its repetitive story or misguidedly campy tone.

Critic Consensus: Knock Knock brings a lot of talent to bear on its satirical approach to torture horror, but not effectively enough to overcome its repetitive story or misguidedly campy tone.

When a devoted husband and father is left home alone for the weekend, two stranded young women unexpectedly knock on his door for help. What starts out as a kind gesture results in a dangerous seduction and a deadly game of cat and mouse.

Knock Knock, which is about two women wreaking havoc on a married man, aspires to be titillating. But more than anything, both persistently, persuasively angle to make you angry.

The characters are driven by convenience, not behavior, and their actions seem like they've been manhandled into place to make the plot work.

"Director Eli Roth's "Knock Knock," a remake of the 1977 exploitation picture "Death Game," sometimes plays more like a comedy than like the grungy thriller that inspired it, but that's often all to the good."

There's satiric potential here, but Eli Roth's sense of humor abandons him when his hero isn't about to get down with the get down.

As a piece of social satire, "Knock Knock" winds up being not just toothless but anticlimactic.

...sonically tortured by techno and stabbed with a fork, Reeves is game for the kitsch carnage that ensues.

it does leave you hanging there but if you like a guilty pleasure... this is definitely it.

Knock Knock begins with a sinister, sexy premise, but its tonal inconsistency and misguided direction never quite let the film find its feet.

Knock Knock tries its hardest to freak us out but ultimately doesn't quite go far enough.

Despite the lack of gore for horror hounds are used to from Roth's previous work; there is no doubt a maturing happening with the projects he attaches himself to. Knock Knock delivers the sexy-psycho thriller it intends.

"It was free pizza!" Ugly and depraved, Knock Knock is a sexual horror thriller from director Eli Roth. The story follows a married man who's seduced by two women who show up at his door claiming to be lost, but the next day he finds himself a captive in his own home being judged and punished by the women for his infidelity. Lorenza Izzo and Ana de Armas give terrifying performances that really pull off the crazy especially well. However, the film's theme is poorly constructed, as the girls are too violent and psychotic to be rooted for and Keanu Reeves' character is never revealed as having any dark secrets or having committed any egregious acts that are worthy of the punishment that he receives. So while Knock Knock attempts to address some interesting issues, it ends up undercutting itself and devolving into mindless games of torment.

Not being a fan of Eli Roth or the torture porn sub-genre itself, I went into this film with serious reservations. I hoped against hope that with the appealing inclusion of Keanu Reeves that this might be worth some time. Reeves has been involved in the occasional dud here and there, but he's also been known to unearth a few gems in his time. I was hoping for the latter and also hoping that Roth may have moved on from his gratuitous early films like Hostel and Cabin Fever and actually managed to mature somewhat Alas, my reservations were correct. Evan Webber (Keanu Reeves) has the house to himself for the weekend while his wife and children take a trip away. Evan's supposed to be working from home but the arrival of two young women at his doorstep temp him to do otherwise... Those familiar with the 1977 psychological thriller Death Game will know what to expect already with this one but for those unaware, fear not. It doesn't take long to get the gist of this and co-writer/director Roth doesn't waste any time setting up this remake: Reeves is a happily married man, living the suburban life with his wife, kids and family dog. There is, however, a small hint from a passing comment of Reeves flirting in the past and it's also noted that, due to family life, he and his wife haven't had sex for three weeks. So, the stage is set... Reeves gets on with his work one stormy evening until two young damsels come knocking on his door. They've lost their way, of course, and ask for his help. They flutter their eyelashes, make suggestive sexual comments and dance flirtatiously to Spanish music. Not before long they're naked and helping themselves to a shower while poor Keanu is folding their panties that he so obligingly dried in his machine. Naturally, they refuse to catch the taxi home leaving good ol' Reevesy with no choice but to bump fuzzies. Now, if only Reeves had been privy to the ominous use of music (that the audience hears so consistently to foretell danger) he'd have known that these ladies are bad news. And so ensues depravity, torture and mayhem. You may be reminded of such psychological films as Michael Haneke's Funny Games or David Slade's Hard Candy but the major difference is that those films are actually very good. Quite frankly, this is awful. Had it's tongue been lodged firmly in it's cheek it might have gained a modicum of respect but it didn't. And it doesn't! If there's any attempt at humour here then Roth has failed to capture it. It takes itself far too seriously. There's absolutely no consideration for the plot other than to move things along to the next depraved moment and the acting is woeful; Reeves is as wooden as he's ever been but, to be fair, his best moments come when he's being tortured. Or maybe that's because I could completely empathise with his excruciating pain while enduring this film. Ridiculous doesn't even begin to describe this and I should have trusted my instinct before going into it. I simply don't like Roth's films and after this I'll not be going near another one. If truth be told, I wish he'd just go away and stop wasting everyone's time. The last I heard, "Knock Knock" was the beginning of a child's joke. However, this joke stretches over 90mins and doesn't even deliver a punchline. At one point Reeves' character even screams out "what's the point of all this?" - I found myself asking the same question. Unequivocally one of the worst films I've ever had the misfortune to sit through. Maybe once the dust settles I might be able to see this as one of those films that are so bad they're good. I doubt it, though, this was absolutely awful. Like Roth's previous films it's just downright nasty and leaves a very bad aftertaste. No, Eli! Just No! Back away from the camera and leave the filmmaking to the bigger children. Now, go home and get your f@*in' shinebox. Mark Walker

This is not the Eli Roth of Hostel or The Green Inferno, he much more sophisticated in this blessedly kinky home-invasion thriller. Other than a fork stabbing and a paper-mache artwork with a corpse inside, Roth doesn't indulge in his forte of graphic dismemberment. However, a blaring headphone-volume torture is an innovatively depraved method indeed. It's almost crystallized through sweeping helicopter shots and gliding camera movements through Evan's (Keanu Reeves) palatial home that this is the highest budget for the maverick Roth. Reeves has been accused of overacting in the latter half of the film but, quite honestly, it requires unhinged, blood-curdling rants when he is systematically raped, degraded and buried to his neck in a backyard grave (his analogous rationalization that their seduction was "free pizza" because they "suck his c**k" is bombastically delivered). If anything, Reeves' mischievous impishness with his two children beforehand is more strained. The foreplay to Evan's indiscretion is masterfully choreographed with Reeves visibly squirming from contact and the two girls fawning over his 43-year-old physique and deejay skills. It would be impossible for any non-impotent to not be aroused during the erotic threesome. The social commentary behind Roth's solid script is how male adults despicably sexualize school-girl-age women and whether a seemingly felicitous family man will succumb to temptation if teased with the opportunity. This could signal a turning point for Roth to segue into more psychological terror. While the endgame could be easily equivocated in Evan's favor, the film itself is a labyrinthian cautionary tale about whetting one's appetite.