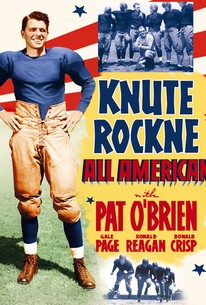 The Knute Rockne legend is largely founded on this Lloyd Bacon biography, in which Pat O'Brien stars as the sainted Notre Dame football coach. In his most famous role, Ronald Reagan plays star quarterback George Gipp, who utters the immortal line "Win one for the Gipper!" Also titled Knockout and A Modern Hero.

John Sheffield
as Knute as a Boy

Glen S. "Pop" Warner
as Himself

Howard Jones
as Himself

Glenn 'Pop' Warner
as Himself

Amos Alonzo Stagg
as Himself

Bill Spaulding
as Himself

George A. Billings
as Boy Quarterback

Peter B. Good
as Bill Rockne at Age 2

Fredrik Vogeding
as Elder
View All

As a memorial to a fine and inspiring molder of character in young men, this picture ranks high.

Perhaps Ronald Reagan's greatest talent was his ability to float to the top.

Carries both inspirational and dramatic appeal on a wide scale.

Knute Rockne: All American (1940) is the inspirational film biography of the famous and prominent Notre Dame football coach, Knute 'Rock' Rockne (Pat O'Brien). The immortalized coach is brought to life in this excellent, episodic film...

The director Lloyd Bacon did a great job on recreating the environment. [Full review in Spanish]

Corn doesn't grow any higher than this male bonding tribute to testosterone.

The movie...is corny and sentimental, but it set the bar for all future sports pictures.

It set the way for how the Hollywood sports biography was to be subsequently made.

The one genre from the 30's and 40's that suffers the most is easily the biopic. There are some great ones from this era, but most of them are the paint by number biopics like Knute Rockne. You see tragedy approaching from a mile away and they are filled with unrealistic and wild statements like "Look there, the forward pass, that's gonna change football forever!" I love films from this era and almost all of them have a line or two like this, but Knute Rockne and many other biopics from this time are littered from beginning to end with this garbage. The performances aren't bad, it's just the structure is flawed and makes the film goofy. I am glad that biopics nowadays don't suffer the same fate as......wait a minute.