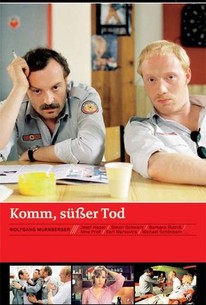 After burning his bridges as a detective, a man tries to redeem himself driving an ambulance in this dark comedy from Austria. Brenner (Josef Hader) was once a police detective, but after the local chief of police discovered Brenner was having an affair with his wife, he found himself off the force and in need of a steady job. Despite Brenner's appetite for booze and drugs, he soon finds work as a driver for an ambulance company, where it becomes obvious that he's not that different than his colleagues -- a rough and rowdy bunch who are struggling to outwit another local ambulance service and who make up in daring what they sometimes lack in civility and common sense. When a nurse well known to the drivers is brutally murdered, Brenner decides to put his experience as a detective to work, and with the help of his girlfriend Berti (Simon Schwarz) and fellow driver (and onetime schoolmate) Klara (Barbara Rudnik), Brenner sets out to track down the killer. Komm, Susser Tod is based on a novel by Wolfgang Haas, who also co-wrote the screenplay with director Wolfgang Murnberger and leading man Josef Hader. ~ Mark Deming, Rovi

There are no critic reviews yet for Komm, süsser Tod (Come Sweet Death). Keep checking Rotten Tomatoes for updates!

There are no featured reviews for Komm, süsser Tod (Come Sweet Death) at this time.