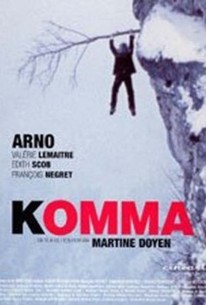 A man who has regained his life falls for a woman who has lost her identity in this offbeat comedy/drama from Belgium. Peter de Wit (Arno) suffered a severe heart attack and was declared dead at a hospital in Brussels, but while no one is looking he comes to in the morgue, shaken but little worse for wear. Swiping the clothes and wallet of fellow deceased patient, Peter treats himself to a night on the town, and while dining at a Chinese restaurant, he meets Lucie (Valerie Le Maitre), a performance artist. Lucie was debuting a new piece earlier in the evening, but after paying a visit to her mother she was sexually assaulted by Edouard (Francois Negret), her former boyfriend, and she's had a delayed reaction to the trauma that has left her with temporary amnesia. As Lucie tries to recall who she really is, Peter is having a splendid time being someone else for the evening, but can either put much stock in their mutual attraction given the circumstances? Komma was the first feature film from writer and director Martine Doyen. ~ Mark Deming, Rovi

Visual bravado and narrative teasing lead nowhere in particular, which is frustrating in the presence of so much raw talent.

There are no featured reviews for Komma at this time.