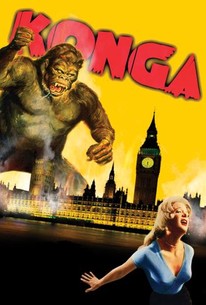 A British botanist goes bananas after he discovers a serum that turns his cuddly chimpanzee subject into a ferocious gorilla-sized ape. To further his hideous experiment, the scientist mesmerizes the chimp and sends into London to kill all of his former enemies. One of those he has killed is the lover of the girl the doctor wants for himself. This doesn't set well with the botanist's assistant and current gal who gets even by giving Konga the giant chimp an enormous amount of the strange serum and turns him into a Godzilla-sized monster. Just before going on a deadly rampage, the super-sized ape grabs the bad doctor in one of his enormous hands. Fortunately, the British army and all of its weaponry are able to stop the chimp before he destroys the town. ~ Sandra Brennan, Rovi

Sam Sylvano
as Konga the Chimpanzee
View All

A hoot from beginning to end, this is sheer B-movie lunacy of remarkably bad proportions, and all the more essential for it.

Konga is a giant ape movie to be sure but Gough's Dr. Decker is a mad scientist in the mode of Peter Cushing's Dr. Frankenstein from Hammer's series...

Get in shape, ape!

if you're one of those sadomasochistic cinephiles looking for raspberries this is a sure fire winner.

A deliciously silly monster film for only the lovers of dreadful films.

Bad enough to be funny, but not funny enough to make it worthwhile

There are no featured audience reviews yet. Click the link below to see what others say about Konga!