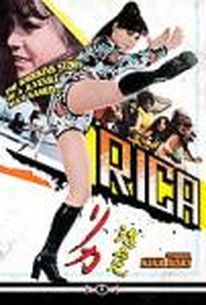 The offspring of a Japanese mother who was raped by an American GI sets out on a mission of vengeance in this 1972 exploitation classic. Rica was raised by the knife. Raped by one of her mother's johns as a young girl, Rica harbors a simmering hatred for all men and soon becomes involved with violent street gangs. In the underworld, fear is power, and everyone fears Rica. Repeatedly jailed and battered as she develops her lethal skills, Rica knows that the rule of the streets is kill or be killed. Now, with vengeance in her heart and blood on her hands, the girl who entered this world fighting vows to exit the same way as she takes down every man who stands in her path. ~ Jason Buchanan, Rovi

Repulsive though much of the content may be, the very speed at which the thing moves is this film's saving grace.

There are no featured reviews for Konketsuji Rika (Rica) (Rika the Mixed-Blood Girl) at this time.