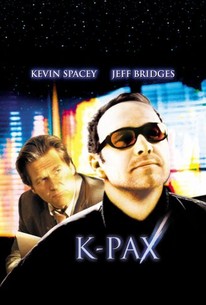 Critics Consensus: For those who have seen One Flew Over the Cuckoo's Nest or Starman, K-Pax may not hold anything new. The movie works best as a showcase for Kevin Spacey and Jeff Bridges.

Critics Consensus: For those who have seen One Flew Over the Cuckoo's Nest or Starman, K-Pax may not hold anything new. The movie works best as a showcase for Kevin Spacey and Jeff Bridges.

Critic Consensus: For those who have seen One Flew Over the Cuckoo's Nest or Starman, K-Pax may not hold anything new. The movie works best as a showcase for Kevin Spacey and Jeff Bridges.

A mysterious and extraordinary mental patient, named Prot, convinces both staff and fellow patients that he comes from a utopian planet called K-PAX. While his psychiatrist, Dr. Mark Powell, is baffled by this cheerfully confident man, Prot's description of life on a planet 1000 light years away awakens a sense of possibility among the other patients. The doctor gradually begins to witness this so-called alien having a remarkable effect on the mental health of the hospital's other patients. When Prot says he's going back before the summer ends, all the patients in the ward vie to go with him. As the days before Prot's announced departure from earth race by, Dr. Powell struggles with questions of science. Determined to prove the stranger is nothing more than a tragic victim of multiple personality disorder, the doctor soon finds himself doubting his own diagnosis.

Zofia Borucka
as Woman on Train

Vincent Capone
as Thug
View All

Casting [Spacey and Bridges] against each other gives their scenes together a believability and intensity that comes directly out of their contrasting acting styles.

The most shameless psychological quackery to come out of Hollywood since Mumford.

Go with it ... and this good-looking movie is a moving and cathartic experience.

A warm, fuzzy and funny duet between [Kevin] Spacey and [Jeff] Bridges.

K-Pax goes all too quickly k-put.

A spiritual and intellectual wonderland of filmmaking.

Generally speaking, K-PAX actually works better as a film than as a novel. And it's not often you can say that!

Who else but [Jeff] Bridges could invest a mouldering cliché like the world weary shrink who can solve everyone's problems but not his own with such depth and feeling? What a truly wonderful actor he is.

This being a Hollywood movie, the realistic is soon left out on the curb as quickly as a Christmas tree on December 26, and as mournful-looking.

A nonsensical therapeutic melodrma about the shifting relationship between a mentally disturbed patient (badly acted by Spacey), who claims to be from another planet, and his problematic shrink (the reliable Jeff Bridges) who goes through menopause.

A different sci-fi, w/o the waterfall of FX from Industrial Light and Magic, about a psychiatrist (Bridges) faced with a man (Spacey) claiming to be from outer space. It has its flaws, but I still enjoyed it and the questions it presents. It's interesting, as well, to see Bridges (who played the spaceman/Christ figure in John Carpenter's iconic film, Starman) now play the foil for Spacey (who actually simply does a variation of what Bridges did before)(cocks head and looks up as if listening to someone ... God?).

Whats right with this movie, is that its beautifully written, well acted, and very beautifully scripted and captured. I like the premise of the movie and although its slow going and your not really sure what happens at the end but you come to some conclusions. A nice enough movie but not fantastic!

Just about as much watchable as avoidable. An average sci-fi flick IMO.

Science fiction based on reality is never good.