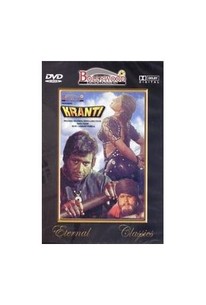 The British did not give India its independence on a silver platter. Independence was the result of a long and bloody battle. "Kranti" is the story of how two men became soldiers in that battle. Sangha is a honest and dedicated employee in the kingdom of Ramgarh, owing allegiance and loyalty to no one except Raja Laxman Singh. When Laxman Singh conditionally permits the British to use the port for trading purposes, Sangha finds out that the British are taking out gold and jewelery and bringing in ammunition, he puts a stop to this. He goes to report this outrage to Laxman Singh, only to find him stabbed to death and he charged with treason and of killing him. Sentenced to death, he escapes and forms a group of revolutionaries who have only one motto - drive the British out of India. This group multiplies into several armies, all united with one slogan - an Independent India. Which is also known as Kranti.

There are no critic reviews yet for Kranti. Keep checking Rotten Tomatoes for updates!

There are no featured reviews for Kranti at this time.