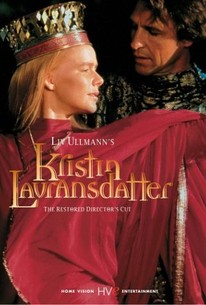 This medieval period drama from Norway is based on Scandinavian-author Sigrid Undset's classic novel. The story is set in Norway's Gudbrandsdal valley during the 14th century. The tale begins when Kristin is 7-years-old and living a peaceful, relatively happy life with her family. It has not always been so happy though, as her parents have already buried three sons and nearly lost Kristin's little sister in a logging accident. Though still quite young, Kristin has been betrothed to marry Simon Darre, a wealthy neighbor's son. Unfortunately, the young girl already prefers the company of Arne to Simon. Time passes and Kristin suffers an attempted rape in the forest. She is confused by the act and asks her family to send her to a convent. Later the young woman sees a handsome knight, Erlend Nikulausson, and falls head-over-heels. Unfortunately, Erlend has more pressing romantic problems trying to deal with his previous lover. ~ Sandra Brennan, Rovi

I can't imagine this film being enjoyed by even the most die-hard IKEA-phile.

Liv Ullmann's devotion to this classic comes across in her intense direction of this tale of one woman's yearning.

There are no featured audience reviews yet. Click the link below to see what others say about Kristin Lavransdatter!