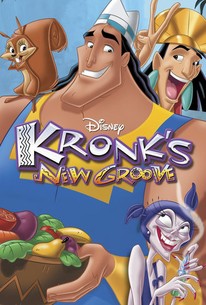 The voice cast of Disney's 2000 animated hit The Emperor's New Groove returns in this sequel in which newly established restaurateur Kronk attempts to whip his diner into shape before the arrival of his visiting father. Business at his newly opened restaurant just isn't as good as Kronk had hoped, and upon receiving a llama-gram stating that his father is currently en route, the stressed chef and his enchanting partner Yzma begin cooking up a scheme that will give the restaurant the distinct smell of success. When the plan backfires and an enormous cheese explosion leaves Kronk and company scrambling to get back on their feet, it's up to his friends to convince him that the only way he'll ever achieve true happiness is by remaining true to his groove no matter how heavy the odds are stacked against him.

April Winchell
as Hildy/Marge/Tina
View All

Great voice talents, but weak storyline and frankly not much groove.

I always loved the character of Kronk.... However, it may have been a mistake to give him his own movie.

...this film proves that [Kronk] works best in small doses...

If its characters, music, and action seem to an adult less than inspired, that's the price one pays for watching a straight-to-video sequel.

if you want to spend more time with these characters, you're probably better off just re-watching the original film.

It's just too generic, and generic is not what we want from a sequel to a film that managed to escape the Disney mold.

Disney have a modern habit of whipping out straight to DVD sequels of some of their best animated movies. And I don't juts mean the reasonably good ones, I mean the really good ones alongside them. Admittedly this franchise was fine for a sequel seeing as the first was such a good laugh, fresh, original and well made. The problem is, as with many of these straight to DVD releases, the animation clearly hasn't got the same punch as the original film. Its not even a close call, you can see it a mile away, the whole thing has gone from a classy Disney romp to a shoddy weekday cartoon...in the visuals department. OK OK...its not totally horrendous I'll admit but it certainly is a huge step down. The characters aren't even drawn as well as before! the backgrounds are still fine, same with the rich colours, but general animation has clearly been produced quicker looking tackier, no sheen or gloss here. The one thing that is still top notch is the voice cast, everyone is back and on cue as they were before which is a blessing really. Had they used stand-in's this would have been terrible beyond belief. The story is centered around Kronk this time, the Emperor is narrating from time to time and pretty much all the other characters are present and correct. We do see more village folk this time and more character expansion as you would expect but none are massively interesting. Its all about Kronk trying to impressive his strict father by showing he owns a house and has a wife with kids blah blah blah...All the things a parent expects of their children basically, and old Kronk's gotta meet the grade. This is all done in a couple flashbacks that give you some basic backstory to Kronk but not a lot. There are two main stories really, one which sees Kronk back with 'Yzma' again and the other revolving around his job as a camp counselor for the Junior Chipmunks, something that was touched on at the end of the first film. So there isn't too much stretching of the imagination really, one story just sees more villainous tomfoolery with Yzma and the other just follows on from a single idea at the finale of the last film. I feel they have missed a chance for another special movie here, this whole product feels rushed and not entirely thought out. I'm very confident this could have been much more creative with its stories instead of just giving us more of the same basically. Yeah sure they continue where the last film left off which is good but the whole thing could of gone much further than it did, it just feels like they stuck in their own backyard for safety. Using Kronk as the main character was a neat little progression but in the end he's not as funny for the whole run time and works better in smaller doses. But the real issue here is the complete lack of a decent plot, its rather boring basically, the groove has gone, long live the groove!.

This sequel to the beloved original "Emperor's New Groove" is just as unsatisfying as you would fear it to be. Having nothing to do with the first, while borrowing many jokes from it just feels extremely lazy, and about halfway through may just want to shut it off. The film revolves around Kronk, who is one of the villains of the first, and here we learn to care about him. The story is just too weak and the jokes are slim to nil. It may be fine for children to watch, but the jokes are very lame, and will not make many adults laugh. The scriptwriter was handed a dumb idea and did the best he could with it, but the film just is not very good. "Kronk's New Groove" fails on many levels, but as a child's film, it's fine.

Pitiful attempt at continuing the cutest and one of the best Disney films. If they had just gone with a straightforward, linear plot, things might have worked out alright. But noooo...