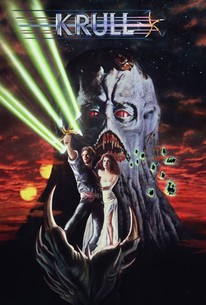 At a time that belongs to neither the past nor the future, the planet of Krull...a world peopled by creatures of myth and magic...faces annihilation. Slayers, alien beings commanded by the seemingly omnipotent Beast, are everywhere, and only one man can oppose them. Prince Colwyn must journey to a faraway cavern to recover the mystical Glaive, a key to extraordinary powers required to defend his world. On his quest, he gathers about him an unlikely army, with which he travels through Krull, witnessing sights and events beyond his wildest imagination, searching for his young bride and the Beast that holds her captive.

Francesca Annis
as Widow of the Web

Bill Weston
as Menno
View All

The only real fun comes from guessing which cinematic predecessor it'll rip off next.

Do I recommend it? Not a chance.

It contains some interesting concepts, but it has a remarkably difficult time not appearing entirely derivative of other works.

Genre-hopping director Yates was never going to make a cookie-cutter Star Wars clone, and the soundstage stuff feels incredibly clunky. However, the film comes to life whenever it travels outside of the studio, and generally exudes old-fashioned charm.

You enjoy it for that long-ago ten-year-old who remembers how great it seemed.

Despite the heaps of '80s hair and the special-effect sparks added to the clanking of swords, this is richer stuff than anything by Lucas before it, or Peter Jackson after it.

Pretty dumb, although the glass spider is cool...

Deserves a bigger cult following than it has.

A real treat for fans of the quest genre.

Before Lord of the Rings this was the closest you got to a fantasy/action epic. Had good SFX for the time of filming '83! Featuring a young Robbie Coltrane and Liam Neeson.

Having revisited this film more than 30 years since I last saw it as a boy, I enjoyed "Krull" even more that I did then. The special effects are surprisingly strong for a film made in 1983 (for the most part), and the film score is excellent. Costumes are cheap but effective. The acting is dismal, but you do get to enjoy early performances from the likes of Liam Neeson and Robbie Coltrane. "Krull" is enjoyable as silly, retro fantasy fun.

Cheesy but appealing. I enjoyed it, but I can't say it's the best thing I've ever seen. lol