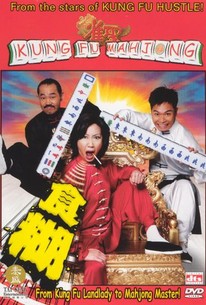 It's mahjong madness when a pair of scheming gamblers finds their once-lucrative hustle leading them into hot water in this action-comedy starring Kung Fu Hustle's Yuen Wah and Yuen Qiu and directed by God of Gamblers helmer Wong Jing. When betting man West meets a waiter named Wong who possesses the remarkable ability to remember the exact position of all 144 mahjong tiles on the table, the pair set into motion a foolproof scam that brings in big money on the mahjong circuit. Though the upcoming "Master of Mahjong" tournament offers the prospect of big money and even greater fame, the pair finds their once perfect plan going to pot when West is kidnapped by some scheming opponents with a plan of their own. Now, as the tournament draws near, it's up to Wong's boss Auntie Fei to enter the tournament, put her gambling skills to the test, and take the tables by storm.

There are no critic reviews yet for Kung Fu Mahjong. Keep checking Rotten Tomatoes for updates!

Not quite as funny as Kung Fu Hustle, but this humorous drama does keep you entertained.