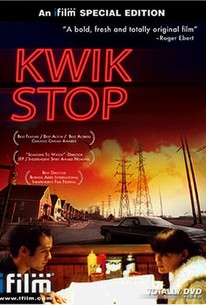 Two strangers discover you really can find anything at a convenience store -- even love -- in this engaging independent romantic comedy. Mike (Michael Gilio) is an aspiring actor stuck in a small town who has big plans of moving to Hollywood so he can strike it rich. One night, while on his way into a corner store, he meets Didi (Lara Phillips), a pretty but aimless girl hanging out in the parking lot. Mike and Didi strike up a conversation, and she discovers there's a big dose of self-doubt lurking beneath his confident exterior. Mike, on the other hand, finds that the longer he talks to Didi, the more he finds himself thinking she might be a good reason to stick around. Kwik Stop was the debut feature from writer and director Michael Gilio, who also co-stars as Mike; the film premiered at the 2001 Los Angeles Film Festival.

Blindsides us with unexpected humor and sadness, and is one of the unsung treasures of recent independent filmmaking.

This is the debut feature for Columbia College graduate Gilio, and it shows great promise.

By turns infuriating, charming, wistful and annoying, Kwik Stop winds up a touching, if frustrating film.

Gilio does some interesting things with his direction, but his strength comes in his very believable scripted dialogue and his acting

There are no featured audience reviews yet. Click the link below to see what others say about Kwik Stop!