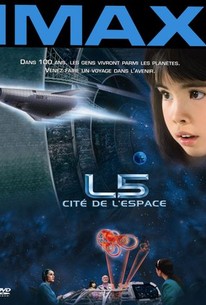 Set in a vast space station orbiting the outer solar system, this IMAX spectacle imagines what life might be like for the first human settlement in space. The community is home to seven-year old Chieko (Rachel Walker) along with her mother (Genevieve Langlois), her father (Denis Akiyama) and her grandfather (Colin Fox), all of whom are experts in their given scientific fields. Though the station is self-sufficient in such necessities as food and air, the water supply is suddenly discovered to be dangerously low. Chieko's dad offers to make the perilous voyage to a local comet to replenish their stocks. The film seamlessly melds footage from NASA and the Mir space station with state of the art special effects.

With the local premiere of the 3D space movie L5: First City in Space, IMAX has not-so-boldly crossed a new frontier.

There are no featured reviews for L5: First City in Space at this time.