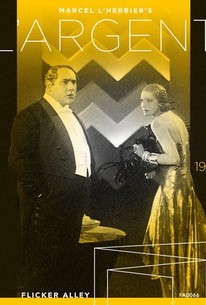 This French production was based on a novel by Emile Zola, of the same title. Pierre Alcover stars as Saccard, a ruthless and untrustworthy banker who is all but ruined by speculating on the European stock market. Exulting in Saccard's imminent destruction are two old enemies, rival businessman Gunderman (Alfred Abel) and cast-off mistress Countess Sandorf (Brigitte Helm). Briefly rescued from poverty when he aligns himself with Hamelin (Henry Victor) a war hero-turned-petroleum profiteer, Soccard once more faces ruination when Hamelin is reported missing and presumed dead. Upon being assured that Hamelin is safe, Saccard cold-bloodedly sets about to stab his new partner in the back and assume control of his petroleum holdings. But Saccard is foiled by the last-minute manipulations of Gunderman, who ends up inviting Hamelin to join his operation. L'Argent was adapted for the screen by Marcel L'Herbier.

Antonin Artaud
as Gundermann
View All

It's largely familiar stuff but when it's told with such boldness and beauty, who cares?

There are no featured reviews for L'Argent at this time.