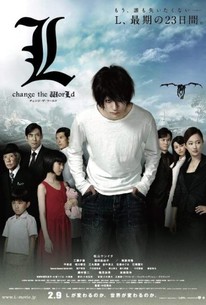 A detective has a tight deadline to crack a case that could claim the lives of millions in this crime drama, a spin-off from the Desu Notu (Death Note) franchise. L (Kenichi Matsuyama) is a cop with a serious sweet tooth and a fondness for gadgets who has been handed a very important assignment. A group of environmental radicals who want to decimate the Earth's population in the name of a greener world have gotten their hands on a potent man-made virus that could wipe out half the globe if it is released. It's L's job to track down the eco-terrorists and see that the virus is kept under wraps, but after signing his own name in the Death Book, he's given himself only 23 days to bring the radicals to justice. L: Change the World was the opening-night attraction at the 2008 Udine Far East Film Festival and was a major box-office success in Japan.

There are no critic reviews yet for L: Change the World. Keep checking Rotten Tomatoes for updates!

Not as good as the first two movies, mainly because it is entirely unrelated to the whole Death Note thing. However, L is a great character and I was happy spend two more hours with him.

Hideo Nakata's spin off of the Death Note series, L: Change the WorLd, is exactly that. Just a simple spin off.

Although this picture does follow it's own separate storyline, there are small bits and pieces, especially in the early going, that relate to the original Death Note plot. With that said, watching the previous 2 Death Note films, or at least understanding the original plot, is beneficial before viewing this one.

The run time is just over 2 hours and for what transpires in this picture, it is a bit long. The character and story build up does take a while and it is nearly 1 hour in before the interest level starts to pick up. The story isn't overly complex, and while this does leave off confusion, it is still somewhat of a letdown.

Ken'ichi Matsuyama shines as L, and because of his antics, any scene involving his character is enjoyable. Mayuko Fukuda also delivers an entertaining performance. The villains are stereotypical and the only person worth noting is Youki Kudoh as Dr. Kujo.

As the 23 days go by, L: Change the WorLd plays out more like an action adventure rather than a battle of wits. Grab some sweets and enjoy the watch.

A little extra spin-off movie to continue the adventures of L from the Death Note saga. It an enjoyable action adventure but not much else. It adds nothing to the story and also develops into a familiar Hollywood action type film. Death Note was a battle of wits, here we have car chases and even L jumping onto a moving plane. He is given two child sidekicks which, surprisingly, work. We get to see a tender side to L, but not the typical cutesy crap. Matsuyama's performance is consistent and still fantastic, though it takes such a simple plot a long time to set up, so you wonder if he'll be relegated to scenery. The slight references to Death Note are actually quite distracting and perhaps could have been left out. It's an overlong but decent film. Certainly if you want to see L one more time.