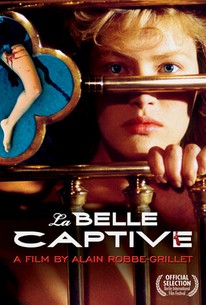 This French film has a plot that sounds like an expansion of an urban legend. Walter (Daniel Mesguich) and Sara (Cyrielle Claire) are a married couple who have just moved into a new home together. Everything seems to be going well, despite Walter's fascination with a mysterious woman named Marie-Ange (Gabrielle Lazure) in a nightclub. Then one night, running an errand for Sara, Walter finds Marie-Ange tied up in the middle of the road. He takes her to the nearest villa, hoping to contact a doctor, but he only ends up locked in a bedroom with her. In the midst of their inevitable passion, visions of Magritte paintings dance in Walter's head, for some reason. In the morning, Marie-Ange is gone and Walter's neck is bleeding. ~ John Voorhees, Rovi

Trying to make sense out of this film is like waiting for a dwarf to grow.

Surrealist curiosity directed by Robbe-Grillet. Has the effect overall of a Ridley Scott Chanel commercial. Will certainly hold one's attention even if the plot is incomprehensible.

There are no featured audience reviews yet. Click the link below to see what others say about La Belle Captive!