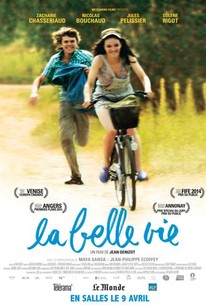 Sylvain and Pierre have been running from the law ever since a custody battle with their mother pushed their father Yves into hiding ten years ago. But now that they're older, the two brothers are road-weary and eager to take advantage of the perks of young adulthood. When the authorities discover their whereabouts, they are forced to move yet again and Pierre, the elder, disappears. Alone with his father on an island in the Loire River, Sylvain meets Gilda: his first girl, his first crush, and the first stop on his way to his own good life.

There are no critic reviews yet for La belle vie. Keep checking Rotten Tomatoes for updates!

Evoking Jeff Nichols' Mud, The Good Life; follows a fugitive father and his two sons who've spent their years running. Its the Sons' desire to life a normal and decent life that's the conflict the drives the story within the family relationship. Maybe its just my choice to watch the unusual side of adolescence written out in a radical yet believable situation in a movie like this. Its all within the actor's performances and central conflict that drives the film forward without being sappy at all. Once again you have an impressive film that manages to live up to expectations.