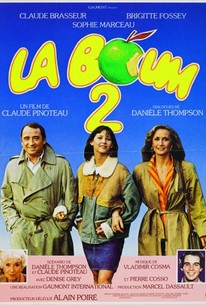 This sequel to La Boum, a teenage romantic comedy that was a big box-office success in Europe, revisits Vic (Sophie Marceau), who is now 15 years old and living in a slightly more stable home, since her parents (Brigitte Fossey and Claude Brasseur) have resolved their differences and stopped bickering. Love has come to Vic's grandmother (Denise Grey), who is thinking of getting married again. And romance is knocking on Vic's door as well when she meets a boy in her class named Philippe (Pierre Cosso). But now Vic has to decide if this is real love -- and if it is, if she should go all the way with Philippe. Like the first film, Le Boum 2 was a solid moneymaker, and it earned Sophie Marceau a César Award (the French Oscar) as Most Promising Young Actress of 1983.

There are no critic reviews yet for La boum 2. Keep checking Rotten Tomatoes for updates!

There are no featured reviews for La boum 2 at this time.