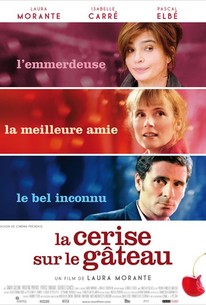 A lonely woman with a crushing fear of commitment attends a New Year's Eve party that puts her in an uncomfortable predicament in the feature directorial debut of veteran French actress Laura Morante (The Son's Room, The Dancer Upstairs). It seems that every time Amanda gets close to a man, she finds a reason to break off the relationship. Her best friend Florence wants nothing more than to see Amanda in a stable relationship, but Florence's husband Hubert theorizes that Amanda's fear of men drives her to self-sabotage any chance at true love. His hypothesis seems to have some basis in fact when Amanda dumps her latest boyfriend Bertrand for thoughtlessly eating the cherry on top of a cake the couple purchased together. As New Year's Eve approaches, Florence and Hubert attempt to coax Amanda out to their party. Eventually, Amanda agrees to come - but only under the condition that all of the guests will be couples except for Florence's gay co-worker Maxime. But when Maxime cancels at the last minute and Florence's married colleague Antoine shows up in his place, Amanda is faced with an unexpected turn of events.

There are no critic reviews yet for La cerise sur le gâteau (Cherry on the Cake). Keep checking Rotten Tomatoes for updates!

There are no featured reviews for La cerise sur le gâteau (Cherry on the Cake) at this time.