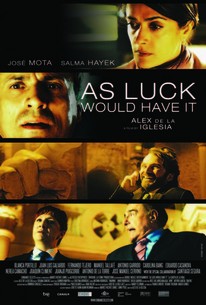 La chispa de la vida (As Luck Would Have It) Photos

Roberto (famed Spanish comic José Mota) once had a promising careers in advertising. But now out of work during the economic downturn, he struggles to keep his family afloat and their dire situation a secret from his adoring wife Luisa (Salma Hayek). After yet another dead end interview, it seems like reality will come crashing down on Roberto - until a freak car accident places him at the center of a wild media storm. Realizing his opportunity, Roberto hires a brazen agent to help him leverage his new found fame into fortune, but Luisa begins to worry about what lengths Roberto will go to for his family's security. The new film from beloved cult director Alex de la Iglesia goes into fresh territory for the daring director, a dark comedy/social satire that also works as a deeply felt drama about the devotion of a husband and father. A wild riff on manhood in the modern media world, As Luck Would Have It is a skewed take on the strange world we live in.(c) IFC Films

This dark satire may be hard to watch at times, but its' queasy mix of satire and tough love should be seen for how black comedy can be done outside the U.S.

Family is the truest wealth, insists a strenuous orchestral score, but neither Feldman nor Iglesia seems to buy it, so how can we?

Though it slickly offers up drama, black comedy and enjoyable perfs in due measure, the pic never develops much bite, though it does bare its fangs.

A great looking film, its ancient Roman amphitheater a perfect stage for its tragicomic contents. Unfortunately, it's completely devoid of sparks of any kind.

Without de la Iglesia's rough edges, ﻿﻿﻿the film can't really work as a satire; instead, it has to make do with being a well-made, eccentric comic melodrama-﻿﻿﻿﻿which, frankly, isn't all that bad.﻿

But for some unbeknownst reason, in "As Luck Would Have It" the idea seems half-baked; and Mr. de la Iglesia is merely phoning it in.

With hat in hand, Roberto(Jose Mota) goes to a friend and former colleague in the advertising business desperately looking for work. Sadly, all he comes away with is an offer for a scholarship offer for his son and finds another friend too busy playing video games to see him. In order to cheer himself up, he goes to the hotel in Cartagena where he and his wife Luisa(Salma Hayek) spent their honeymoon. Instead, he finds a historical dig underway, followed by a tragic accident... Even though there might be other similar sounding movies, "As Luck Would Have It" still manages to claim its own ground with just the right mix of caustic satire and heart, including some of Salma Hayek's best work. That ground becomes increasingly important once you realize it can stand for a variety of things. As a spectacular Roman amphitheatre, it might seem obvious but then there is the running thread of an internal criticism of current day Spain that either imports everything or where everybody is leaving. That's not to mention the more general criticism against voluntarily surrendering one's privacy.

Surprising negativity for a surprisingly good film. This film sums up the troubles of Spain in the near past. A man clings to his only bizarre hope of succeeding in the economy - a freak accident that is perilously close to killing him.

La chispa de la vida (As Luck Would Have It) Quotes