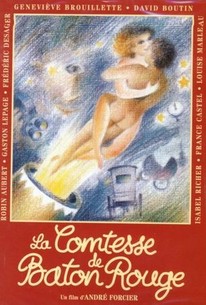 In a style evocative of Fellini at his most surreal, this bizarre French Canadian fantasy follows the romance between a young filmmaker and a bearded lady from a local circus during the 1960s. The story begins in a contemporary theater where a projectionist describes, to movie director Rex Prince, the ghostly spirit that seems to be haunting his film. The story then races backward to the 1960s when a half-mad, idealistic Rex was busily making his first film, a Marxist tract depicting poverty in Montreal. Edouard Dore, a well-connected editor works with him and it is he who takes Rex to a carnival late one night to meet the performers in a freakshow. The first person Rex meets is Le Grand Zenon, a hulking one-eyed fellow with the amazing ability to use his eye to project movie images on a screen with neither a projector nor film. Later Rex meets the beautiful but facially hirsute Paula Paul de Nerval. For Rex it is almost love at first sight, so he is therefore upset when, only a few hours after their meeting, she takes off to join a Cajun circus in Louisiana . A few months later, Rex, still obsessed with Paula, races southward in an Edsel to become a human cannonball at the same circus as she. The story jumps back to the present to Rex's latest film "La Comtesse de Baton Rouge," a chronicle of his strange love affair with Paula. Up to this point, the story has been surreal and quite poetic, but as Rex's movie unspools, the film becomes a zany comedy. ~ Sandra Brennan, Rovi

There are no critic reviews yet for La Comtesse de Bâton Rouge (The Countess of Baton Rouge). Keep checking Rotten Tomatoes for updates!

There are no featured reviews for La Comtesse de Bâton Rouge (The Countess of Baton Rouge) at this time.