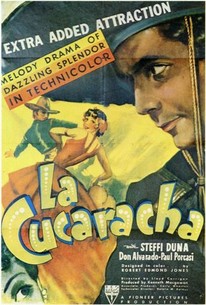 In and of itself, La Cucaracha is a modestly entertaining two-reeler concerning the antics of a jealous Mexican cantina girl (Steffi Duna). In love with a stuck-up dancer (Don Alvarado), Steffi tries to sabotage his efforts to land an important dancing engagement in Mexico City, so that she won't be left alone. First, she sabotages a salad being prepared for an important theatrical impresario (Paul Porcasi); when this plan fails, she throws Alvarado off his dance by loudly singing the film's title song. All ends happily of course, as two-reelers are wont to do. What sets La Cucaracha apart from other short subjects of its ilk is the fact that it was the first live-action featurette to be filmed in the improved three-strip Technicolor process. The producers take every opportunity to show off this technological advancement by concentrating on the deep blues, vibrant yellows and vivid purples that were impossible to accurately convey in the old two-color process. La Cucaracha was successful enough to encourage its production company, Pioneer Films, to lens a full-length Technicolor feature: Becky Sharp (1935), which like La Cucaracha was distributed by RKO Radio Pictures.

The short itself is negligible in story and acting. But as a radical step forward in the use of color in the cinema, it is a distinguished and exciting achievement.

There are no featured reviews for La Cucaracha at this time.