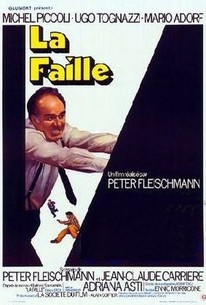 This international collaboration has five unrelated titles in four languages, and includes filmmakers and stars from France, Germany, Italy and Greece. It is set in the modern period in Greece, during that time known as "the rule of the Colonels." The story concerns the cat-and-mouse police investigation of Georgis, a travel agent (Ugo Tognazzi), for his possible involvement in the death of a man under surveillance who was shot in the cafe at which Georgis was having lunch. For a while, it is impossible to tell who is the cat and who the mouse; ultimately, though, the heavy-handed tactics of the police win through.

There are no critic reviews yet for La faille (Weak Spot). Keep checking Rotten Tomatoes for updates!

There are no featured reviews for La faille (Weak Spot) at this time.