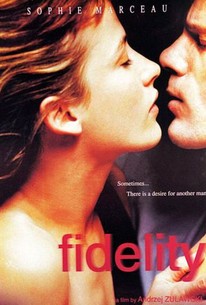 Maverick auteur Andrzej Zulawski directs this flamboyant adaptation of classic French novel La Princesse de Cleves, complete with dirt bike races, hot sex, and naked hockey players. Talented Canadian photographer Clelia (Sophie Marceau) lands a financially lucrative job in Paris at a rumor-mongering tabloid called La Verite run by Rupert MacRoi (Michel Subor). Though she finds most of her coworkers to be disillusioned and perverse, she happens upon Cleve (Pascal Greggory), a bumbling middle-aged children's book publisher. Cleve is days away from marrying MacRoi's daughter to bolster his flagging publishing house. Nonetheless, Clelia and Cleve retire to his office to make love almost immediately upon meeting. Though MacRoi has already bought his company, Cleve breaks off his wedding plans and proposes to Clelia. Enter Nemo (Guillaume Canet), a sexy young photographer who promptly propositions her upon their first encounter. In spite of her ferocious sexual attract to Nemo, Clelia marries Cleve and resolutely keeps to her wedding vows in the face of her suitor's continued advances. Madame de la Fayette's novel, from which this film draws inspiration, has already been adapted twice: the 1961 version was directed by Jean Delannoy and starred Marina Vlady, and the 1999 take, entitled The Letter was directed by Manoel de Oliveira and featured Chiara Mastroianni.

Cécile Richard
as Séléna
View All

There are no critic reviews yet for La Fidelite. Keep checking Rotten Tomatoes for updates!

A hotshot avant-garde photographer with time-honored principles who has never known love decides to marry an adoring suitor anyway, then meets a talented, impulsive, and reckless photojournalist who tempts her wild side. Can she stay faithful to her vows while she yearns for real happiness? Andrzej Zulawski finally reigns in his over-the-top tendencies to make a film I felt was worth watching, while still cutting loose for a couple crazy action sequences. I must concede that he always pushes former spouse Sophie Marceau further than other directors, and while her character can be frustratingly difficult to figure out, she remains compelling all the same. No grand revelations about the human condition other than happiness is merely an illusory defensive shield, but if you've watched Zulawski before you know that already. 2:40 is an extremely long time to delve into relationship and moral angst but I was involved enough that it went by at a relatively crisp pace, greatly assisted by some stimulating frame composition.