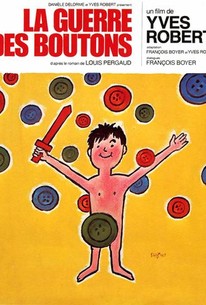 In this gentle anti-war comedy, a class of French schoolboys divides into two factions who begin to battle each other, with the victors claiming the buttons off the clothes of the vanquished. One day, some of the boys pull a strategic coup by running into battle naked, therefore leaving their enemies nothing to steal. However, after this stunning victory, one of their number turns traitor to the other side, helping them plot a secret attack that leaves the recent champions in defeat. The informer is eventually found out and punished for his crimes, so he takes the matter to a higher authority and tells his parents he's been beaten up by bullies. Soon Mom and Dad are making trouble for their son's schoolmates, with the culprits facing a stay in juvenile hall. La Guerre des Boutons was written and directed by Yves Robert, who had a distinguished career both in front of and behind the camera in the French cinema. ~ Mark Deming, Rovi

The humor is dependent on the incongruity of little children mouthing dirty words. Once is funny, over and over again is tiresome and the humor grows thin.

There are no featured reviews for La Guerre des Boutons (War of Buttons) at this time.