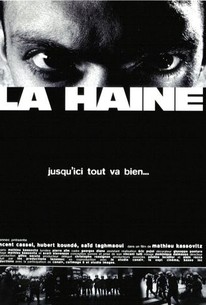 While to most outsiders Paris seems the very picture of beauty and civility, France has had a long and unfortunate history of intolerance toward outsiders, and this powerful drama from filmmaker Mathieu Kassovitz takes an unblinking look at a racially diverse group of young people trapped in the Parisian economic and social underclass. Vinz (Vincent Cassel), who is Jewish, Hubert (Hubert Kounde), who is Black, and Said (Said Taghmaoui), who is Arabic, are young men from the lower rungs of the French economic ladder; they have no jobs, few prospects, and no productive way to spend their time. They hang out and wander the streets as a way of filling their days and are sometimes caught up in frequent skirmishes between the police and other disaffected youth. One day, a street riot breaks out after police seriously injure an Arab student; the three friends are arrested and questioned, and it is learned that a policeman lost a gun in the chaos. However, what they don't know is that Vinz picked it up and has it in his possession, and when Vinz, Hubert, and Said get into a scuffle with a group of racist skinheads, the circumstances seem poised for tragedy. Actress Jodie Foster was so impressed with La Haine when she saw it at the 1995 Cannes Film Festival that she helped to arrange American distribution for the film through her production company, Egg Pictures.

La Haine is an unmissable response to an unending emergency.

La Haine makes no bones about being anti-police, but Kassovitz's screenplay leaves plenty of room for nuance.

A layered conundrum that builds to a stunning crescendo, Mathieu Kassovitz's Hate is an extremely intelligent take on an idiotic reality: the mutual mistrust, contempt and hatred between the police and France's disenfranchised young citizens.

It cuts deeper and shows us the foolishness of its characters as it mourns their inevitable tragedy.

Writer-director Mathieu Kassovitz mines so much tension and pointed dialogue from a low budget and deceptively simple premise that you wonder why so much of current Hollywood's own social realism ends up shooting $50 million blanks.

Starkly funny, politically poignant, and extremely honest in its social portrayal, it endures as one of the greatest films of the 90s.

One of the most important films of post-war French cinema.

The young men may be cut from different ethnic and cultural backgrounds (Jewish, Black and Arab) but are united in their impoverished station and palpable frustration.

A really charged, pulsating film shot in gorgeous black and white, and it still really holds up.

Focusing on a day in the life of three social outcasts of Paris and impressively well filmed in black and white with extremely elegant long takes, this powerful drama comes as a profoundly relevant commentary on the continuous cycle of hate that only generates more hate.

I didn't expect this; what a pretentious film. The DVD cover proudly states how 'powerful' it is, and how it was a 'wake up call'. I'm sorry, this film about urban chaos has been done better many times, Taxi Driver being the first example that springs to mind. It's all been said before, but it's upon watching films like 'La Haine' that you truly realise what Robert De Niro created in that performance, his descent into madness totally consumes the viewer. 'La Haine' on the other hand has three leading characters, who, like the film itself, are quite frankly boring. There's no real depth to them, they're annoying, they're just three angry, bitter scumbags who can't function properly in decent social circles(with the exception of Hubert for the most part, however he can be just as bad, as showcased in the art gallery scene). The characters, especially Vincent Cassel's 'Vinz', quickly become tiresome. I'm afraid I'm all too familiar with these types, those playing the victim of society, moaning that they have no opportunities when they know full well that they could make something of themselves if they tried, they're just scared. People like that thrive off making a nuisance of themselves. However, that slightly sociological rant brings me onto some praise; I commend how accurately the characters are represented, but 90 minutes of these characters simply doesn't make for good viewing. Very little happens in 'La Haine', it relies on dialogue, and that certainly doesn't help it, it's no 'Pulp Fiction' in that respect. The narrative, much like its characters, is aimless, not good film making. The only thing I'll remember about La Haine is its abrupt ending, which just serves as chronic bathos in my opinion. If the team responsible for this were aiming to recreate the dreary trials and tribulations of a few members of the Parisian underclass, they achieved admirably.