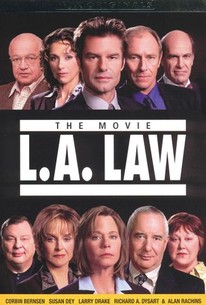 This two-hour TV movie served as a reunion for the cast of L.A. Law, a popular NBC legal series which originally aired from 1987 to 1994. Virtually all of the series' regulars were back on the job, with the noteworthy exception of Jimmy Smits. Most of the story takes place within the walls of the high-powered McKenzie-Brackman legal firm, which since the retirement of Leland McKenzie (Richard A. Dysart) had been controlled by the rule-bound Douglas Brackman (Alan Rachins). The main plot strand zeroes in on lawyer Michael Kuzak (Harry Hamlin), who in his efforts to save a former client from execution is pitted against his former partner -- and lover -- Judge Grace Van Owen (Susan Dey). Meanwhile, legal eagle Arnie Becker (Corbin Bernsen) is in the throes of a divorce action brought about by his wife (and ex-colleague) Abby Perkins (Michelle Greene); attorneys Stuart Markowitz (Michael Tucker) and Ann Kelsey (Jill Eikenberry) are being defrauded out of their life savings; and Roxanne Melman (Susan Ruttan) copes with the imminent death of her ailing ex-husband. Known variously as L.A. Law: The Movie and L.A. Law: Return to Justice, the film was telecast by NBC on May 12, 2002.

Michael Tucker (I)
as Stuart Markowitz

We finally got sick of it, but they knew what they were doing. And still do.

There are no featured reviews for L.A. Law: The Movie at this time.